Vonn signs on as honorary ambassador for Pyeongchang Games

Vonn signs on as honorary ambassador for Pyeongchang Games 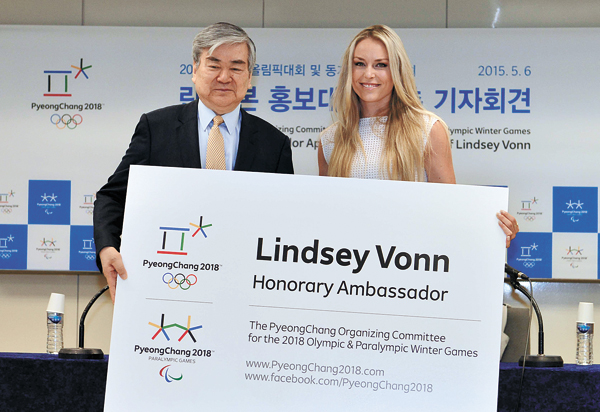 Olympic alpine skiing champion Lindsey Vonn was appointed as an honorary ambassador for the 2018 Winter Games in Pyeongchang on Wednesday, saying it’s “an honor” to promote the Olympics.

“I will do my best to honor the Olympic spirit and encourage kids to participate in sports, especially in Asia and Korea,” Vonn said at a press conference in Seoul. “I believe in what the Olympics stands for.”

As a top skier, she also aims to raise the profile of her sport, in addition to promoting the quadrennial event.

“My goal almost my entire career has been to promote skiing, not just in America, but all over the world,” she said. “I think it’s an amazing sport.”

Vonn won the gold medal in downhill at the 2010 Winter Olympics in Vancouver, Canada, becoming the first American woman to do so, and collected bronze in the super giant slalom.

Vonn, who arrived Monday in Korea, said she plans to compete in Pyeongchang. “At my last Olympics in Vancouver, I won gold in downhill and finished third in super-G and I will try to improve upon those results, if not match them,” she said.

Vonn missed the 2014 Winter Olympics in Sochi, Russia, due to a knee injury, after competing in three previous Winter Games.

“When you are injured, you just have to stay positive and keep working hard and eventually things will turn out good again,” she said. “You have to find your goal and motivation and keep working.”

As for the Winter Games’ alpine skiing venue, which she visited on Tuesday, Vonn said preparations seem to be going well.

“The site looks very challenging .?.?. It’s very steep [with] a lot of jumps, which I really like,” she said. “I’m looking forward to seeing it with snow.”

“As the weather gets warmer, construction on the venues is speeding up,” he said.

Meanwhile, Vonn declined to comment on her breakup with U.S. golfer Tiger Woods, saying she had already expressed her thoughts on her Facebook page. It was announced on Sunday that Vonn and Woods had ended their relationship.

“After nearly three years together, Tiger and I have mutually decided to end our relationship,” Vonn wrote on Facebook. “I will always cherish the memories that we’ve created together. Unfortunately, we both lead incredibly hectic lives that force us to spend a majority of our time apart. I will always admire and respect Tiger. He and his beautiful family will always hold a special place in my heart.”