Investment, greenbelt rules to ease up

Investment, greenbelt rules to ease up 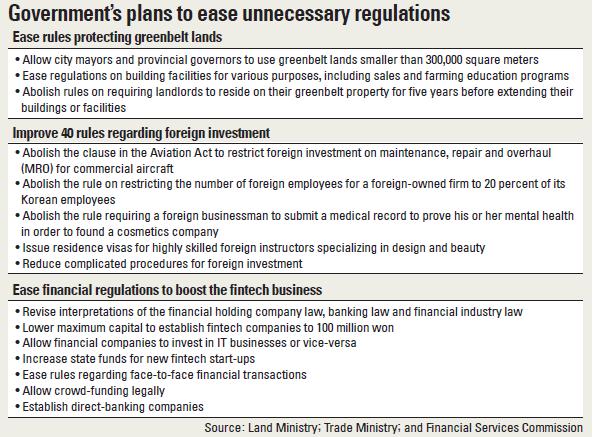 The nation’s greenbelt, the area in which the government has restricted development for more than four decades, will see several new measures targeted at improving the lives of the residents there.

Additionally, regulations that have limited foreigners from investing will be lifted, according to the government, which announced a package of measures to reform the number of regulations deemed ineffective or unnecessary.

At a cabinet meeting Wednesday presided over by President Park Geun-hye, government ministers proposed their own plans to lift or ease excessive rules in their sectors.

The meeting, the third round of such talks held since last year, was part of the president’s call to boost the domestic economy through deregulation and increased investment amid the latest economic data, which shows high youth unemployment and sluggish consumption and investment.

According to the Office for Government Policy Coordination, the government expects the deregulation measures to generate 17.8 trillion won ($16.4 billion) worth of economic effects and investment by 2020.

Easing regulations on abolishing greenbelt zones was one of the Ministry of Land, Infrastructure and Transport’s primary ideas.

Under eased rules, the government will allow city mayors or provincial governors to abolish greenbelts smaller than 300,000 square kilometers (115,830 square miles) without first gaining approval from the ministry. So far, it takes at least two years for a local government head to earn permission, which often hinders investment and development in the area.

The Land Ministry also eased the requirement that land owners in greenbelt zones must reside there for at least five years before they can extend or add on to their current facilities.

According to a report released by the ministry on Wednesday, officials received about 70 complaints regarding the regulations so far.

One property owner said that he wanted to purchase a small restaurant in a greenbelt zone and add on a bigger parking lot and dining hall, though the restriction forced him to throw in the towel.

The easing of the regulations in greenbelt zones, first designated in 1971, came amid declining populations and rising new businesses in those areas.

Currently, there are 3,862 square kilometers of greenbelt zones total in Korea across seven cities - which make up about 3.9 percent of the entire country. But the number of residents in those zones has dropped over the years, from about 950,000 in the 1970s to 110,000 now.

One of the expanding business models in greenbelt areas is what is known as farming experience programs, in which families and children who live in major cities can learn about agricultural production.

The greenbelt - a massive green zone surrounding Seoul - was designated by President Park Chung Hee, the father of the incumbent president. The main purpose of it was national security.

Along with measures for developing the greenbelt, officials proposed easing or lifting about 40 regulations geared toward spurring foreign investment.

Perhaps the biggest reform was the abolition of a clause in the Aviation Act that banned a foreign company from investing in the maintenance, repair and overhaul (MRO) of commercial aircraft, or a stake greater than 50 percent in a local MRO business.

The government said a Singaporean company previously planned to invest in an MRO business for commercial aircraft in Incheon but scrapped the plan due to the restrictions on shares.

Catalyzing employment for foreign workers was also included. The Ministry of Justice will ease the restriction on hiring foreign employees that limited them to no more than 20 percent of the number of Korean employees at any firm with foreign investment.

The Justice Ministry will issue residence visas for instructors specializing in some service industries, such as design and beauty, as an increasing number of foreign institutes in those sectors consider launching overseas classes in Korea.

So far, it has been impossible for highly skilled foreign workers in those sectors to get long-term residence visas. They were offered only for professors invited by local universities or teachers with language-education certificates.

“These unique regulations … [are] raising costs among foreign investors in the country,” she said. “We should set regulation levels to be in line with global standards to stimulate foreign investment and allow our companies to expand overseas.”