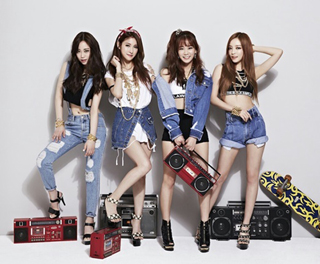 Kara’s 12th single was released on Tuesday in Japan, marking the fifth anniversary since the group debuted in the country. Up to 28,000 copies of the single were bought on the day it came out.

In addition, the group is planning to release their fifth regular album, “Girl’s Story,” in Japan. The album will contain the song “Forever Love,” which was originally sung by one of the first K-pop girl groups, Fin.K.L.

Kara is currently promoting their new album by holding various fan meet-ups in Tokyo and Osaka. The four members of the group will return to Korea on Sunday to prepare for their comeback there at the end of May.

Kara debuted in 2007 with their first album, “Blooming.” Although the girl group originally had five members, Nicole and Kang Ji-young left the group at the beginning of last year. Heo Young-ji was added as a new replacement member. By Jin Min-ji