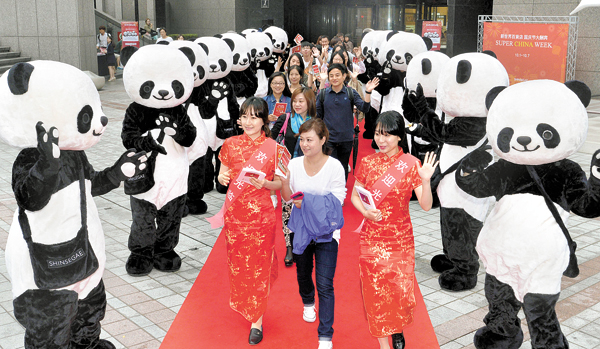 Chinese tourists spent nearly 10 billion won ($9.3 million) at Shinsegae’s main department store in central Seoul during the April 24-May 3 holiday period, an increase of 42 percent from last year, according to the retailer.

At Lotte Department Store, spending by Chinese shoppers jumped 57.5 percent year-on-year from Friday through Sunday at its main branch in Myeong-dong as measuresd by transactions using China UnionPay, the most frequently used credit card by Chinese tourists.

Chinese spending at Lotte accounted for more than 18 percent of total sales at its main store during the period, up from 5.1 percent in 2012 and 10 percent in 2013. 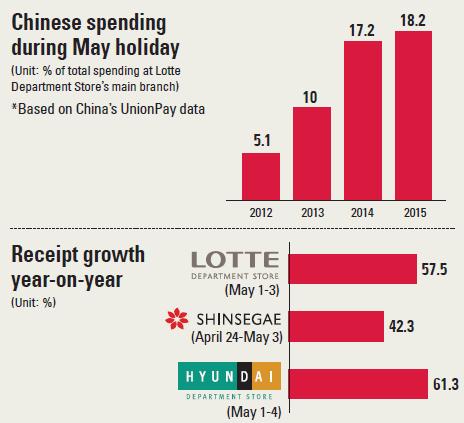 “This year, we learned the full power of Chinese tourists’ almost explosive spending during the holidays,” said Hong Jung-pyo, an executive in charge of sales strategy at Shinsegae department store.

“Chinese tourists are smart shoppers and they have learned the perks of buying cosmetics at department stores [rather than duty-free shops],” said Choi Kyung-shik, a Shinsegae department store employee in charge of cosmetic sales. “In terms of pricing, there is not that big of a difference, as you also get tax refunds here. And free samples are added perks.”

Department stores are offering other perks, such as cultural events and easier payment systems to draw more Chinese tourists.

Lotte Department has adopted Alipay as a payment option for Chinese shoppers. Alipay is a third-party online payment platform launched by Alibaba Group and is widely used in China.

Shinsegae held musical “Bibap” performances at its main store from on Friday and Saturday, and thousands of Chinese tourists came to watch. Overall sales at Shinsegae’s main store during those two days jumped 50 percent year-on-year, according to Shinsegae.

“I am satisfied with my experience here and plan on coming again in October with my fiance to buy things for our wedding,” said Jin Xuan, a 35-year-old tourist from China.