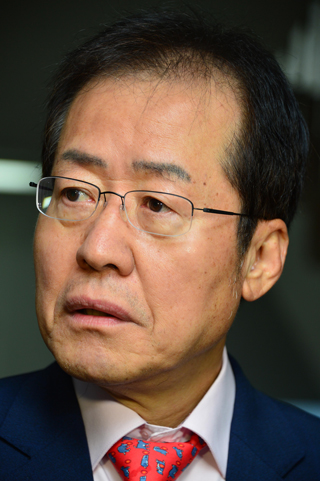 South Gyeongsang Governor Hong Joon-pyo will be questioned by the prosecution this week as a suspect in an investigation into whether a string of major politicians secretly took funds from a late construction tycoon.

The prosecution’s special investigation team said Wednesday that Hong was summoned to appear at the prosecution at 10 a.m. on Friday, and had agreed to submit to questioning.

A former prosecutor and former lawmaker, Hong was elected as South Gyeongsang governor in the 2012 local elections.

He is the first politician to be questioned by the prosecution over an unfolding payoff scandal involving Sung Wan-jong, the former chairman of Keangnam Enterprises.

Sung committed suicide on April 9 amid corruption allegations, leaving behind a note that listed the names of eight politicians next to what appeared to be the amount of illegal political funds he had paid to some of them.

Prosecutors have since obtained testimony from Yoon Seong-mo, the former vice president of Keangnam Enterprises, in which he said that he had personally delivered 100 million won ($92,541) to Hong in 2011.

Prosecutors have already questioned Yoon four times and obtained a statement in which he claimed that he delivered the money to Hong four years ago, when the sitting governor was contending for the ruling party chairmanship.

The politician has not been shy about expressing his willingness to run for president in 2017, but found himself mired in controversy earlier this month when his name appeared on the memo found in Sung’s pocket after he was found hanged on Mount Bukhan.

Hong’s name was written next to “100 million won,” prompting speculation that he took political funds from the former construction tycoon.

Hong was elected as chairman of the Grand National Party, the predecessor to the ruling Saenuri Party, on July 4, 2011. He stepped down from the post, however, on Dec. 9, 2011, to take responsibility for the party’s defeat in the Seoul mayoral by-election in October that year.

The JoongAng Ilbo reported Wednesday that the prosecution had obtained testimony from Yoon, who said Hong was accompanied by an aide, Na Gyeong-beom, when the money was delivered in June 2011. Yoon added that he had personally delivered a paper bag containing the money and that Na had carried it on Hong’s behalf.

Na, who currently works for the South Gyeongsang Provincial Government’s office in Seoul, was in charge of accounting during Hong’s campaign for party chairman. He was questioned on Tuesday, but denied of having known about the money.

According to the source, Kim Hae-soo, a former Blue House political affairs secretary and one of Hong’s confidants, was scheduled to be questioned Wednesday afternoon in preparation for the session with Hong.

He currently stands accused of contacting Yoon to change his testimony regarding the South Gyeongsang governor.

Hong alleged Wednesday that the prosecution was attempting to sway the investigation’s key witness into coming up with a statement that could be used against him.

“Yoon is the prosecution’s only witness, but the prosecutors have been controlling him over the past month,” Hong told the reporters. “And they adjusted his testimonies over 10 sessions. I cannot accept this.”

Hong, who served as a prosecutor from 1985 to 1996 until entering politics as a lawmaker, said Yoon failed to provide a consistent account of what happened at the time of the alleged delivery.

“If he provided a consistent story, the interrogation should have taken no more than a day,” Hong said. “But the prosecution questioned him about 10 times and directed him over more than a month to adjust the statement.”

Hong added that it was possible that Yoon had received money from Sung, but did not actually deliver it.

“Yoon was Sung’s lobbying channel into to the political arena,” Hong said. “He must have made similar deliveries during the presidential and legislative elections, and there must have been a mistake during delivery.”

He continued, “Sung’s last statement to the prosecution, which has evidentiary weight, was that he had given 100 million won to Yoon for personal use. And over the past few days, that money turned into illegal political funds.

“The truth about this case will be revealed when we investigate that process.”