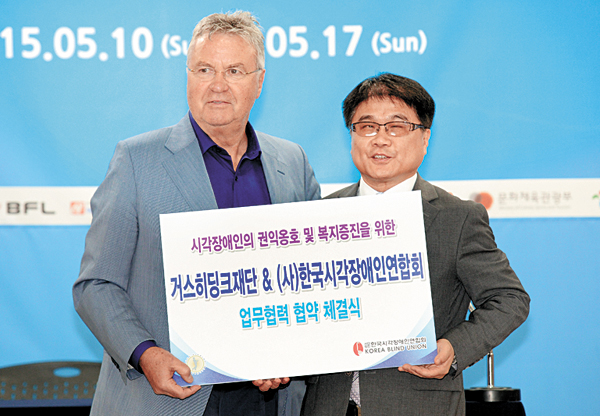 Guus Hiddink, left, was appointed as the honorary president of the Seoul IBSA World Games organizing committee on Thursday. [NEWSIS]

The multi-sport event from the International Blind Sports Federation comes to Korea, with 1,028 athletes from 60 countries. This is the first time that the quadrennial event, in its fifth edition, has been held in Asia.

The games include an eight-day tournament at 11 venues around Seoul Metropolitan area and an opening ceremony slated for 3 p.m. at the Jamsil Indoor Gymnasium, southern Seoul, on Sunday. Athletes will compete in chess, football, athletics, goalball, judo, powerlifting, showdown, swimming and tenpin bowling with 238 gold medals up for grabs.

Athletes can qualify for slots and earn quota points for the Rio 2016 Paralympics.

Korea is participating in the IBSA World Games for the third time.

Both Jeju and Incheon did well in their last matches, and are aiming to extend their momentum on Saturday.

Incheon had its first win of the season after nine matches. Last weekend, the team led by coach Kim Do-hoon beat Dajeon Citizen 2-1, thanks to goals from Kim In-sung and Park Dae-han.

Incheon is worried, however, because it hasn’t won at home for last 10 matches, collecting eight wins and two draws.

Jeju moved up to second place in the league after beating Ulsan Hyundai 2-1. But it has never won away this season, amassing two draws and two losses so far. In addition, the team had allowed one goal in every away match this season.

Entering its third year, the Seoul Open Tennis tournament will kick of this Saturday with 200 players from 20 countries competing in the event.

Sponsored by sportswear brand Le Coq Sportif, this year’s event has been added to the ATP Challenger Tour from the lower-tier ITF Circuit after raising the total prize money to $100,000, up from last year’s $65,000.

Chung Hyeon, who is ranked world No. 88 and the second Korean ever to be in the top 100 after Lee Hyung-taek, will compete. Lee, 39, will also participate.