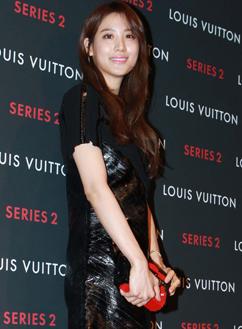 
Along with the fact that some scenes of “Avengers: Age of Ultron” were filmed in Seoul, many fans were excited to see a Korean actress in the film.

The previously little-known Kim Soo-hyun stood on stage to promote the movie shoulder to shoulder with the big-name stars of the cast, bringing hope to aspiring actors in Korea who dream of auditioning for Hollywood movies.

The actress sat down with Ilgan Sports, an affiliate of the Korea JoongAng Daily, and said it feels like the film has become part of her name as everyone has started calling her “Avengers Soo-hyun.” 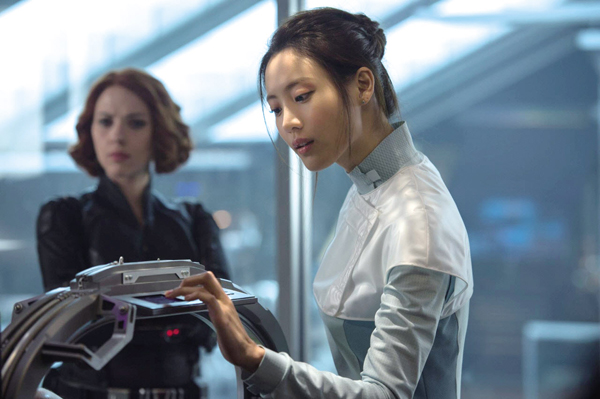 A scene from “Avengers: Age of Ultron” in which Korean actress Soo-hyun played the scientist Dr. Cho. [JoongAng Ilbo]

Q. What made you try out for a Hollywood film?

A. In previous works I took on roles that were chic, and then the offers I got were to play similar characters. I wanted to try something new as a result. After I saw [actor and model] Daniel Henney working in the same agency as me, I learned I could audition for parts in Hollywood.

How did you become part of the “Avengers” team?

I received a one-page script that didn’t state the name of the movie or the name of the part I was to audition for around November 2013. I only knew that it was for a Hollywood movie. Everything was a secret. I waited months after I sent a videotape with recordings of me reading the script. Without knowing who had actually monitored my acting or without any feedback, I heard I got the part.

When did you know that it was the “Avengers” movie?

In the last audition, the director asked me to change the line that says “Is George Clooney coming?” to “Is Thor coming?” Then I realized it was the “Avengers.”

Weren’t you at all curious about what film it was while you were auditioning?

There were some lines talking about cell division so I contacted my doctor friends and asked if this type of cell division was possible. They said no, so I guessed it might be a science fiction film.

Do you know why you were chosen?

I heard the director liked me because I behaved the same before and after I found out I was auditioning for the “Avengers” sequel.

What’s the secret behind your English-speaking skills?

I went to the United States when I was five and lived there for about six years before coming back. I tried using both Korean and English after I came back so that I wouldn’t forget English. In college (at Ewha Womans University), I also worked as a reporter for the English-language newspaper.

I hear you also auditioned for the seventh “Fast and Furious.”

That audition was long before I auditioned for the “Avengers.” From that audition, casting director for TV show “Marco Polo” in the United States [liked] me, and that’s how I got a part in that show.

If I got a part in the “Fast and Furious” series, I probably would have not made it to “Marco Polo” or “Avengers.” It was rather fortunate that I didn’t get the part.

What does it mean to you to have played a role in the “Avengers” sequel?

It is important that I now have a story of my own. I’m also delighted that I broke the widespread prejudice that actors should accomplish something and become famous within Korea before they try making it work in the global scene. I’m excited that there are many paths ahead of me that I don’t know about yet.