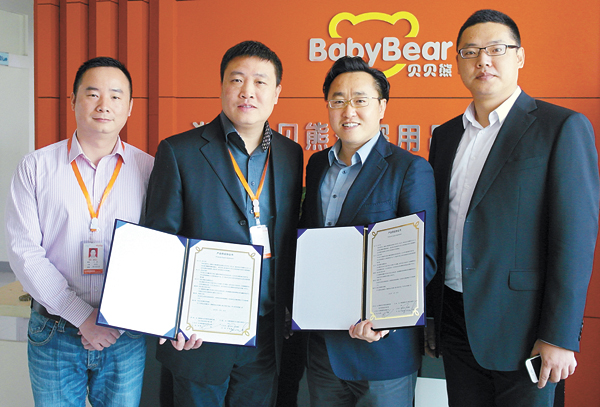 Tebah Global, a Korean company that specializes in retailing in China, said Thursday it has secured a 2 billion won ($1.8 million) contract from Chinese Culture Group to develop retail platforms for toddler and children’s products.

Tebah plans to use the seed money to help Korean manufacturers of goods for toddlers and children establish sales channels in China, starting with an online platform, www.momsbebe.com, the company said.

The website will begin operation June 1, which is Chinese Children’s Day. More than 200 brands, including those from 120 Korean companies, will be available.

Tebah also has secured a deal with BabyBear, a major franchise retailer of children’s goods in China, to supply products via storefronts. BabyBear operates more than 200 stores across China.

Tebah plans to set up specialty sections for both Korean and other foreign brand children’s goods at BabyBear Plus, a more upscale chain operated by BabyBear.

The market for children’s and toddler’ goods in China has seen average growth of 15 percent per year, and the market is estimated to be worth 350 trillion won, according to Tebah.

Korean products are particularly popular with Chinese mothers in their 20s and 30s because of Hallyu, or the Korean Wave.

Korean goods also are believed to be well made and safe, the company said.

“Given the unique structure of the Chinese retailing market, individual brands will have a hard time penetrating the market. But as a platform for brands, they will be able to create good synergy,” said Park Young-man, CEO of Tebah Global. “An online platform alone is not sufficient. With both online and offline channels, we plan to expand our presence in China and continue to create good opportunities for Korean brands in China.”