It’s been months since the phenomenally successful debut of Haitai’s Honey Butter Chip, but Korea’s hunger for the snack is far from dying down. In fact, its popularity has given rise to a new generation of snacks and cosmetics centered on honey, butter and cheese.

Haitai contends that its chip is actually the No.1 seller, taking issue with ACNielsen’s survey methods. Whatever its ranking, the original Honey Butter Chip remains perpetually sold out at grocery and convenience stores. When store managers get ahold of the chips, they usually sell them to preferred customers first.

In online flea marketplaces, the chips are sold at four times their retail price. 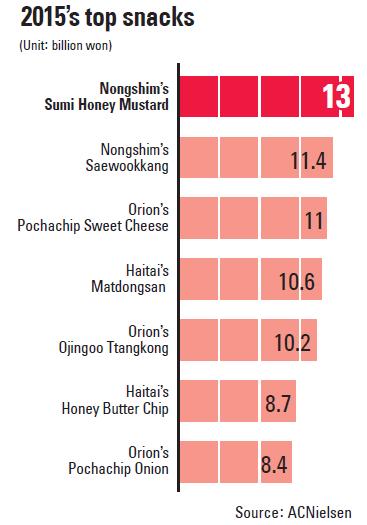 The buttery craze has even spread to financial markets, heating up demand for Haitai’s corporate bonds. Its bond sale last month was oversubscribed; around 270 billion won of investor money clamored for a piece of Haitai’s 3-year bonds, worth just 40 billion won.

“We attribute successful sale of bonds to the success of our Honey Butter Chip,” Haitai spokesman said, adding that sales and profits foe the coming year would easily top last year’s figures.

Korea’s snack market had long been ruled by salty and seafood-flavored chip brands like Saewookkang, a shrimp-flavored snack that’d long been the top seller prior to the honey butter craze, and Pochachips, whose original and onion-flavored chips were No. 5 and No. 2 in 2014.

But the honey butter phenomenon spawned new demand for sweet and cheesy flavored snacks, which are particularly popular among younger Koreans.

It is no coincidence that Honey Butter Chip initially became a phenomenon through social network sites. Hipsters, famous bloggers and even celebrities were touting Haitai’s chips as a must-have product, taking the product from a humble snack to a personal statement.

“Honey-flavored snacks swept through a market that’d been ruled by salty favorites year after year,” said a Nongshim spokesman. “They have opened the door for fresh growth the in snack industry.”

The honey butter craze has indeed increased the overall size of the snack market in Korea. First quarter sales by the top 5 snack makers -- Nongshim, Orion, Crown, Lotte Confectionary and Haitai -- jumped 25 percent to 294 billion won, up from 235 billion won a year ago, industry data showed.

GS25, one of the major convenience store operators, said the sale of potato snacks like chips jumped 101.7 percent year-on-year during first four and a half months of 2015, while overall snacks sales rose 28.9 percent.

Sales of sweet tasting chips were up 52.2 percent year-on-year, while salty chips gained only 15.1 percent.

Consumers are so enamored with the combination of honey and butter that they’re even putting it on their skin.

More than 10,000 of the masks sold in its first 15 days on the market. It usually takes an average of 2 months for a new similar product to hit the same mark, according to the company.

“We realized that ingredients used in making the popular chips were the stuff that were also good for the skin as well,” said Jung Pil-hee, head of product planning team at Able C&C, the maker of Missha brand.

According to Able C&C, gourmet butter and potato is rich with vitamins, helping to moisturize and make skin look more luminous.

“It smells nice, and it probably feels like feeding delicious honey and butter to your skin,” said a Missha store clerk at Lotte Mart in Jamsil, adding that Honey Butter Pack was one of the hottest-selling items on the shelf.

Meanwhile, Haitai has decided to build new production facilities to keep up with the demand for its hit product. When the new facility starts running from early next year, production of Honey Butter Chips is expected to double.

Consumers may be able to pick up the previous yellow bag of its chips at the stores then.