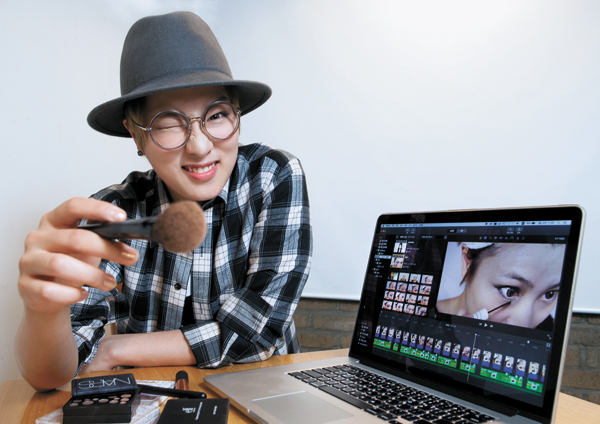 Park Su-hye, a YouTube beauty blogger, influences how people buy cosmetics and apply them with the tutorials she uploads on the video-sharing site. By Park Sang-moon

To begin, Kim checks out the online tutorials of famous beauty bloggers to gauge how a certain product will look on her face before buying it.

She then goes straight to a smartphone app that shows ratings and reviews of the product. As a final step, she moves on to another app to scan the item’s ingredients because she does not like to buy products that include too many toxins.

Kim is just one of a legion of beauty-conscious Koreans who rely on the Internet and technology to change their image through makeup. With its status as one of the world’s most wired countries and due to its citizens’ penchant for beauty, Korea is seeing burgeoning growth in services related to the cosmetics industry on online and mobile platforms.

The shift that has come with the advent of sophisticated technology is empowering consumers who used to depend purely on the air-brushed commercials released by cosmetics companies when deciding which products to purchase.

At the heart of the trend are a handful of beauty bloggers with hundreds of thousands of devotees. Their posts on personal blogs, video-sharing sites and social media accounts range from tutorials on themed makeup for special occasions to direct reviews of products. Some posts are independent while others are sponsored by cosmetics companies.

Park Su-hye, nicknamed Ssin Nim, leads the pack with more than 400,000 subscribers on her YouTube channel. She uploads product reviews, tutorials and makeup looks inspired by movie characters and celebrities.

She started uploading makeup tutorials themed around Japanese comics for fun in 2009, but later started to work on a broader range of content in order to capture a wider audience.

“I started uploading my makeup videos as more of a hobby,” said Park. “But as more and more people viewed my videos and left messages about it, I wanted to do more.”

The 24-year old, who majors in visual design at Chung Ang University, has decided to turn her hobby into a full-time job after graduation.

“Though there are not many people doing this as a job, I’ve learned I can make a living out of it,” she said.

Popular beauty gurus like Park can earn an income by including items sponsored by cosmetics companies into their content. Some also release makeup tutorial books, as Park did a few years ago. 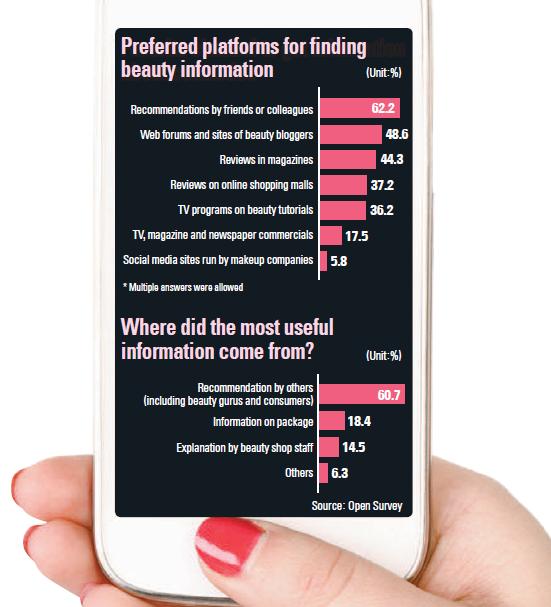 Although the process of creating content that combines entertainment with information is time-consuming, Park’s group of followers drive her to keep moving, she says.

Many of her subscribers write comments on each video clip, share their own tips and ask her questions.

Fans of beauty bloggers explain that they enjoy this type of content as it is both useful and fun to watch.

“There is something relaxing and fun about watching someone discuss foundations, lipstick and blusher and delve into how we can create better makeup by using the items,” said Kim, the office worker.

“Sometimes it’s also really hilarious because they [beauty gurus] share their experience that they stumbled on or other stories related to the particular makeup.”

An interesting aspect of the phenomenon is that a lot of the beauty bloggers use different platforms for slightly different uses.

“In my case, YouTube is the primary medium that I use for talking about cosmetics,” Park said.

“On Instagram I share my daily life - about where I go and what I eat or buy. When it comes to Facebook, I use it as a tool to communicate with my fans.”

Make-up is a must

In Korea, a country that is widely known for its obsession with beauty, the drive to look good is phenomenal. It is still customary for companies to ask job applicants to include photos on their resume.

The pressure often pushes people into seeking ways to look better. One quick shortcut is plastic surgery. Korea saw the largest number of cosmetic operations in the world relative to the size of its population in 2011, according to the latest industry data by the International Society of Aesthetic Plastic Surgeons.

Along with cosmetic surgery, makeup is considered an important tool to improve appearance.

Koreans spent an average of $220 each on cosmetics last year, 6.3 times higher than the global average, according to a report by IBK Securities.

Before beauty bloggers took over, thousands of websites and forums sharing makeup tips and the most sought-after cosmetics were popular.

But with the advent of YouTube, Facebook and blogs, the power shifted to trendy individuals with expertise in makeup.

They serve as self-proclaimed beauty police giving reviews and comparing similar products, although some criticize them for being heavily dependent on sponsorship from companies.

Yet people appear to trust the information shared by them more than that of makeup companies.

According to a survey of 500 women conducted by research firm Open Survey, 48.6 percent of respondents chose beauty blogs or web forums on makeup as their favorite channels for exploring information before buying cosmetics. Only 17.5 percent picked commercials on TV and magazines.

“It is obvious that people are greatly affected by the words of others - consumers like themselves,” the report noted.


Beauty on the move

Browsing beauty-related content is no longer confined to laptops or PCs. As people in Korea become tethered to their smartphones more than to PCs, different apps have emerged.

Among the most popular is HwaHae, which analyzes the ingredients of beauty items. The platform, which has been downloaded more than 1 million times, provided information on 45,320 products from approximately 1,801 cosmetics brands as of May 6. Using data from the Association of Korean Dermatologists, HwaHae lists the potentially toxic chemicals included in makeup products and rates the degree of harm they could cause.

The app is popular because it often shows information that is absent from the covers or commercials of beauty products.

“When cosmetic companies promote their products,” Kim said, “They don’t mention the ingredients that can be potentially harmful. This is why I check this app before I buy cosmetics.”

Another popular app is My Sister’s Pouch, which is designed to provide beauty tips and reviews. Its strength lies in various themed makeup tutorials - such as for dating, sunny days or picnics.

Beauty in Me, which was developed by CJ E&M, focuses on videos that give tips, for example on hairstyles or grooming eyebrows.

Big beauty companies have started using the mobile platform to keep their customers loyal. Instead of promoting their products in text, some companies are focused on providing a useful, often fun, consumer experience.

L’Oreal has launched an interactive app called Makeup Genius. It uses facial mapping technology to turn a front-facing camera into a computer-generated mirror so that users can try on various products - including eye shadow, eyeliner and lipstick - virtually.

Cashing in on the beauty buzz

Cosmetic companies are seeking to seize on the evolving trend of content creators having a bigger influence on social media sites.

Most beauty giants both at home and abroad - including MAC, AmorePacific and LG Household & Healthcare - have all developed marketing strategies that pay the popular beauty experts to get their products featured in their posts.

In return for receiving exposure, the cosmetic company also offers the blogger a selection of products.

In cooperation with YouTube, it held an event called “Beauty Creator’s Day” last year where some 100 bloggers were invited to demonstrate how they do their makeup and share tips.

AmorePacific chose some of them to teach visitors how to handle camera equipment and use computer programs for beauty blogging.

Makeup companies are not alone in capitalizing on the trend.

The company represents 30 popular personalities from YouTube and helps them with scheduling, shooting video footage and other issues.

Its primary role is to prevent the bloggers from violating copyright laws when they use music or other content in the background of their video clips.

Park is among the 30 members it represents.

There are worries about the objectivity of such content when cosmetic makers are deeply engaged with the bloggers, however.

In response to concerns, the Fair Trade Commission introduced a new regulation last year requiring bloggers to notify their audience when content is sponsored.

There is a grey area, however, as the rule does not apply to Facebook and Instagram posts, just blogs and web forums.

Keeping a balance between cosmetic makers and independence is a major issue for content creators.

“It’s true that to make some income, we need to cooperate with companies,” Park, the beauty blogger, said.

“At the same time, I know that viewers will be wary of watching any content that is explicit about promoting products.”

She came up with her own principle as a result.

“I decided to keep a nine-to-one rule - nine being independent postings and one being an advertisement,” she said.

“And whenever I upload a promotional video, I add humor and parody so that people can just enjoy and laugh.”