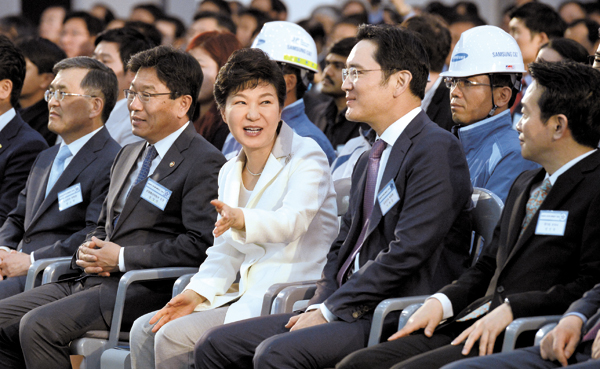 President Park Geun-hye, center, Samsung Electronics Vice Chairman Jay Y. Lee, second from right, and Minister of Trade, Industry and Energy Yoon Sang-jick, second from left, celebrate the groundbreaking Thursday for what will be the world’s largest semiconductor production plant at Pyeongtaek, Gyeonggi. Samsung said the 15.6 trillion won ($14.3 billion) plant on a 714-acre site will produce 41 trillion won worth of chips annually and create 150,000 jobs. With the new plant, the company aims to have a “high-tech semiconductor cluster” that connects its other plants in Gyeonggi at Hwaseong and Yongin to maximize management efficiency in semiconductor production. [NEWSIS]