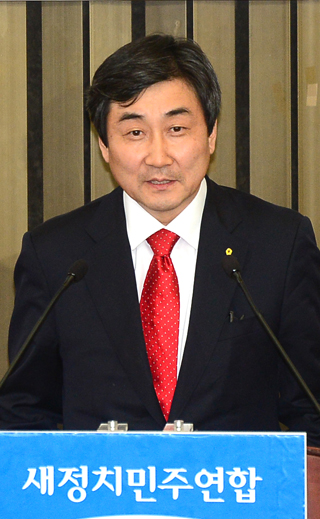 Rep. Lee Jong-kul speaks to fellow lawmakers on Thursday after he was elected as the new floor leader of the main opposition New Politics Alliance for Democracy. [NEWSIS]

The main opposition New Politics Alliance for Democracy (NPAD) on Thursday elected Rep. Lee Jong-kul as its new floor leader, which hands the four-term lawmaker the responsibility of healing internal splits among the party’s different factions in the aftermath of its crushing defeat in the April 29 by-elections.

Lee defeated contender Choi Jae-sung 66-61 to take the NPAD’s No. 2 position in a run-off at the National Assembly. Five NPAD lawmakers competed Thursday, though none received a majority of the votes in the first round, resulting in a runoff between Lee and Choi, who placed first and second in the first round. This was Lee’s fourth bid for party floor leader.

“I think [of my election] as the starting point for fixing divisions within the party,” Lee said during a press briefing after his election. “I will work on my promise to unite the party in order for us to take victory [in the general election next year].”

As the new floor leader of the beleaguered opposition - whose supporters have questioned whether it can function without splitting altogether amid deepening internal strife - Lee has been given the daunting task of finding a way to unite the NPAD.

Illustrating the high degree of internal conflict, some NPAD lawmakers went so far as to openly demand party Chairman Moon Jae-in to step down to take responsibility for its embarrassing defeats at the polls last month.

While Lee vowed to mend ties among different factions, he is outside the group of Roh Moo-hyun loyalists, whose members comprise those who worked in the late president’s administration. Chairman Moon is also the de facto leader of that faction - the NPAD’s largest.

With Lee taking the party’s second-most powerful position, he is expected to both assist Moon and keep him in check. The four-term lawmaker is known as a policy hawk when it comes to negotiating with the ruling Saenuri Party. Lee was not shy from expressing his frustration at the ruling party in an ongoing political tussle over the national pension system.

“What happened [Wednesday] was a violation of the parliamentary system. .?.?. We cannot let the Saenuri walk away from its responsibility, for breaking the promise it made to itself,” he said on Thursday.

Lee’s anger at the governing party centers on the legislature’s failure on Wednesday to vote on a long-awaited reform plan for the pension system for civil servants.