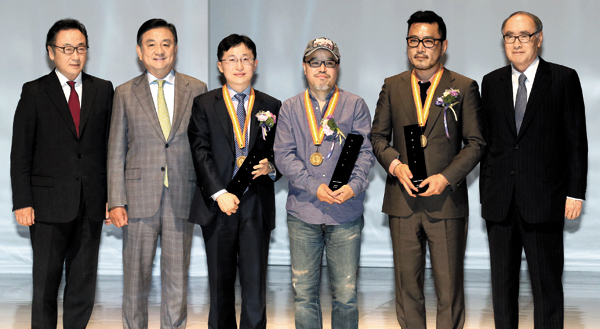 The Yumin Awards, which honored some of the country’s most creative and talented people, honored three Koreans in the scientific, social and cultural fields at its sixth annual award ceremony on Thursday at the Hoam Art Hall, central Seoul.

The Yumin Awards were established in 2010 by the non-profit Yumin Cultural Foundation to commemorate Hong Jin-ki (1917-86), the JoongAng Ilbo’s co-founder and former chairman, and his emphasis on the benefits of creativity in society. Yumin was his pen name.

“I wanted to establish an award which will recall my father’s footprints and recognize novel and talented people,” said Hong’s eldest son, Hong Seok-hyun, the chairman of the JoongAng Ilbo and JTBC. “I believe a society without creativity and innovation is a dead society and it will become more dynamic when we constantly see those values in each and every aspect of our society.”

Professor Kim Dae-hyeong, 38, developed a smart patch to help those suffering from Parkinson’s disease, one of the most common degenerative brain disorders. The disease causes uncontrollable physical trembles due to a malfunction in the part of the brain that secretes dopamine. However, patients can live without considerable inconvenience if they inject medicine in a timely manner.

The patch that Kim developed includes a motion recognition sensor, nanoparticles that contain medicine, an electronic heater and a memory card. It monitors the frequency of the tremors, and the medicine is applied through the skin. Once the plaster is commercialized, Parkinson’s disease patients will not need to worry about injections anymore.

“As an engineer, not a doctor, my dream is to help patients and their families,” Kim said at the awards ceremony. “I’m now working on cutting down the manufacturing price by improving the production process and attaching the power source in the patch as well.”

The plaster was once introduced in “Nature Nanotechnology,” an affiliate of Nature.

Cartoonist Yoon Tae-ho, 47, was also honored for his social contributions. His work “Misaeng,” which he has published on the Internet portal Daum since 2012, centered on youths who have difficulty adjusting to society, especially non-salaried workers. It was made into an eponymous drama by tvN in 2014.

Lawmakers later proposed the so-called Jang Geu-rae bill, named after the protagonist, to extend the maximum period a non-regular worker can work at a company before he or she is promoted as a regular worker.

“I was frustrated to see the bill named after the character,” Yoon said. “I think what matters is the meaning of my work to the society, but it is out of my reach if it has been developed into a social story.”

“I did not mean to talk about social irregularities, but the reality naturally was reflected while I described how people changed in the society,” Yoon continued. “‘Misaeng’ began with a question - whether someone who failed once can restart in this society, and I believe people liked it because they could empathize with the cartoon.”

Even before “Misaeng,” Yoon was known for describing social issues within his online cartoons. “Yahoo,” for example, was about the tragic Sampoong Department Store collapse in 1995, while “Moss” questioned the country’s leadership and collectivism.

The winner in the artistic circle was Cho Min-suk, 50, an architect who won the Golden Lion award for curating the South Korean pavilion at the Venice Architecture Biennale 2014 in June, which aimed to reconnect North and South Korea and housed nearly 40 projects from both cultures.

He did not look too excited when he met with the JoongAng Ilbo at the time, when he heard the news of his nomination for the honor.

He acknowledged that he enjoyed the process, but that the award was merely a bonus.

“I want to study like a student forever, and [the Golden Lion award] was like a bonus because I enjoyed preparing for the Biennale,” Cho said.

“It is time for Korean cities to pursue quality of development rather than quantity. I desperately feel that we are living in an era where we should accept freedom rather than being obsessed with speed.”