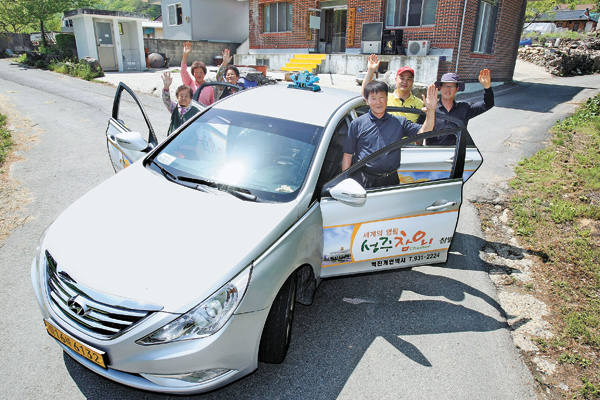 Villagers in Jungri, Seongju County, North Gyeongsang, give a big smile as they get into a cab that charges them just 500 won (0.46 dollars). By Gong Jeong-sik

“What’s all that in the plastic bags?” a gray-haired man asked his neighbor, who just got out of a 25-seat bus at the entrance of the village.

“Meat and snacks. My grandchildren are visiting for the weekend,” the man with two full bags responded.

The bus began running twice a day in December to connect the village and the seat of the township office and it has changed lives of people in the isolated village. 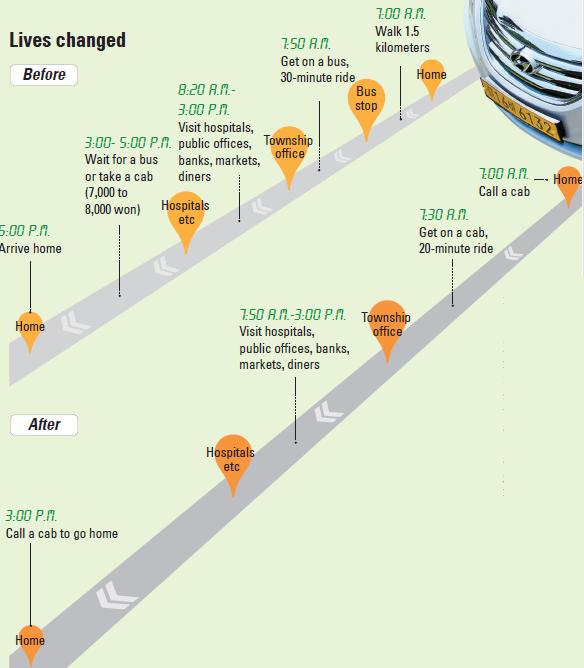 It is part of a government initiative to improve public transportation in rural areas. Yecheon County was designated by the Ministry of Agriculture, Food and Rural Affairs to become a model of advanced transportation.

Beforehand, no public transportation reached the village, home to 62 people, most of whom are 70 or older. The entrance of the village was too narrow for a full-size bus, so villagers had to walk more than 40 minutes to get a ride.

The small bus that goes to the village has helped reduce such inconveniences.

“It has become easier for us to go grocery shopping or see the doctor,” said Lee In-cheol, a 75-year-old leader of the village.

The project to develop transportation in agricultural areas is gaining public attention these days. It is also considered a catalyst for boosting the remote area’s regional economy.

According to Statistics Korea, there were 3,400 areas without transportation of 36,000 officially registered villages.

“When buses are cut off, the older population in such villages has a low quality of life in terms of medical services, culture and economy,” said Ahn Ho-geun, director general of agricultural policy at the ministry. “Transportation that prevents such life-quality deterioration is needed.”

The Agriculture Ministry chose 19 towns and counties last year through a public contest. The project took place in 12 areas, including Yecheon and Muan, South Jeolla. This year, seven more areas are benefiting, including Hongcheon, Gangwon, and Changnyeong, South Gyeongsang.

As many as 55,000 people use the transportation, the ministry said.

Small buses that can accommodate 12 to 25 riders are used in order to navigate single-lane roads. In areas of fewer than 30 people, taxis are recommended.

The Agriculture Ministry and local governments split the cost of the service. Each local entity has earmarked 100 million won for this year. Due to the low fares, bus and taxi companies can’t expect profitability, so the government’s financial support is necessary. Once a month, transportation companies get funds from the government based on their operation costs. There are designated drivers at bus companies to commute to the villages. Two or three taxis visit the villages to pick up residents on regular schedules. In some areas, reservations can be made for taxis, too.

In Jungri in Seongju County, North Gyeongsang, taxis come and go eight times a day since the village was selected for the government project last year. Fifty-one people live in the village. They used to walk more than 30 minutes to catch a bus to town, which passed by twice a day.

“I was suffering aches in the knees and waist because of the long walk,” said Kim Mal-nyeon, a 75-year-old resident. “Now I go to the hospital by making a phone call for a taxi that charges me just 500 won. And my grandsons’ commuting time to school has been far shorter.”

“We are supposed to pick up people at certain times, but as we build relationships with village people, we go there whenever they call us, even at night,” said Do Chang-seon, a 59-year-old taxi driver.

“In the beginning, older residents were shy and uncomfortable about calling the cabs, but now they are used to it and show high usage rates,” said Bae Seong-dae, an official at the county office.

Considering that the average passenger is older, the ministry decided to place regular stops at places where elderly people frequently go, such as hospitals, public baths, some tourism sites and financial institutions.

A research institute in South Chungcheong monitored the project last year and reported that outings by residents of project villages rose from 3.2 times a month to 6.5 times. Their satisfaction with transportation services rose from 41.7 points to 88.6 on a scale of 100.

Few people could go to the five-day outdoor market in the town, because most residents in such areas are fragile seniors who can’t easily walk a kilometer to buy something, and they have little money. They used to go to the town once a month when something was really urgent. But thanks to the cheap bus and tax services, now they visit the town two or three times a week.

“Some elderly people are going farther by transferring buses,” said Shin Dong-won, a cab driver for a village in Gochang County, North Jeolla. “The taxi has imbued the whole county with life.”

Seongju County, where the project is being implemented in 25 villages, also has been seeing a greater commuting population in the center of the township seat.

“I ride a taxi every day to go to the welfare center, and I can even think of going to good diners,” said Do Jeong-ho, 81, who lives in Jungri.

In Wanju County, North Jeolla, the economy is booming thanks to a so-called “Food Bus.” Harvests are transported by the county’s public food bus to retailers in town, helping cut costs for farmers.

“Such transportation service is the basic policy for welfare,” said Ahn at the Agriculture Ministry. “The government will continue developing models for public transportation that meets needs in agricultural areas.”