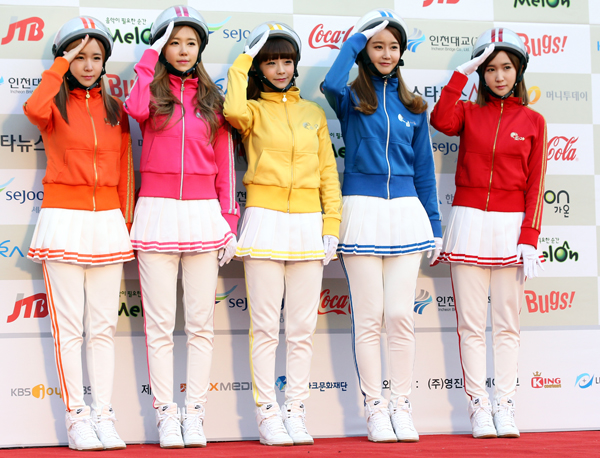 The girl group Crayon Pop appeared on Friday on the U.S.-based comedy video website “Funny or Die.”
In the episode “Can’t Stop Crayon Pop!” which premiered at 8 a.m. local time on Friday, the girls appeared as warriors fighting against the confused monster, CrayonGary.
The video was filmed when the girl group visited the United States in March to perform at South by Southwest, a series of festivals that is hosted annually in Austin, Texas.
Hyuna of the girl group 4Minute and f(x) previously appeared in a video on the site, though Crayon Pop are the first Korean musicians to star in a “Funny or Die” video.
Since it launched in April 2007, the website has amassed about 2,000 users and records around 6,000 hits per video.
A number of celebrities, including pop star Justin Bieber, entertainer Hilary Duff and actress Natalie Portman, have appeared in the videos.
Following the release of their second single, “FM,” the members of Crayon Pop have been concentrating on individual projects, taking part in musicals, web dramas and reality shows.
The girl group debuted with “Crayon Pop 1st Mini Album” in 2012, gaining immense popularly after the hit “Bar Bar Bar” was released in 2013. Their unusual choreography and costumes have helped them stand out.