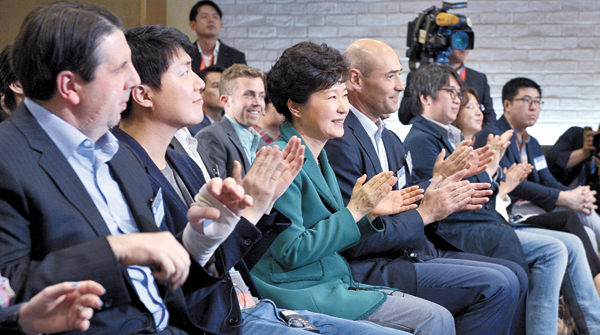 Seoul on Friday became the first city in Asia to house Google’s hub to support entrepreneurs, against the backdrop of the country’s burgeoning start-up industry and advanced technology infrastructure.

Located in Daechi-dong in the affluent Gangnam District, Google Campus Seoul will facilitate local start-ups by providing work space, group meetings, networking and various events. In addition to the provision, the campus will serve as a central area where the global tech giant will mentor and forge cooperation with the two other campuses abroad, one in London and the other in Tel Aviv.

The Gangnam area has become home to a few successful start-up companies, but many tech entrepreneurs in the initial phase would likely find it virtually impossible to rent an office in the district, which is notorious for exorbitant real estate prices.

Karim Temsamani, the president of Asia-Pacific operations at Google, said he could relate to the troubles aspiring entrepreneurs in Korea face.

“We know that smaller companies are scattered around the cities, at cafes using the Wi-Fi system,” he said. “The Seoul Campus is the investment [to solve the issue],” he said.

Another objective, he added, is to help local start-ups push beyond borders to reach out more users.

“Too many start-ups focus locally due to a lack of resources and investment,” he said.

Google said that it will introduce programs such as Campus Exchange, a weeklong program in which start-ups from different campuses work together and learn. “I once had an opportunity to observe the exchange program in London,” said Jeffrey Lim, who heads Seoul Campus operations. “I was really impressed to see start-ups from different campuses incorporate different expertise on fintech, e-commerce and marketing to develop better ideas.”

The space is divided into four key areas: a cafe, working area, space reserved for various events and networking, and Google space, where Google Korea staff members organize programs for the campus.

Any member start-up can use the campus’s cafe and event hall, while part of the work space is reserved for eight contracted start-ups.

Near the cafe, there is also an area known as the device room, where developers can run their apps and programs on gadgets including smartphones and smart pads.

When asked why Seoul was chosen as the first Asian city to host a Google Campus, Mary Grove, the head of the global entrepreneurship outreach division at Google, cited the growing number of start-ups.

“There is a thriving start-up ecosystem in Korea, and we thought it would be great if we could build a physical hub to house the best support program for them.”

At the event, entrepreneurs who have an office inside the building shared their experiences working at the campus over three weeks.

“It has a really good environment to cooperate since there are no cubicles,” said April Kim, the co-founder and CEO of ChattingCat, a start-up that provides instant English-language correction service. “And the place is also good for networking since a number of start-ups visit the campus.”

More than 1,000 entrepreneurs are members of the Seoul campus. By 2015, Google will open campuses in Madrid, Warsaw and Sao Paulo, Brazil.