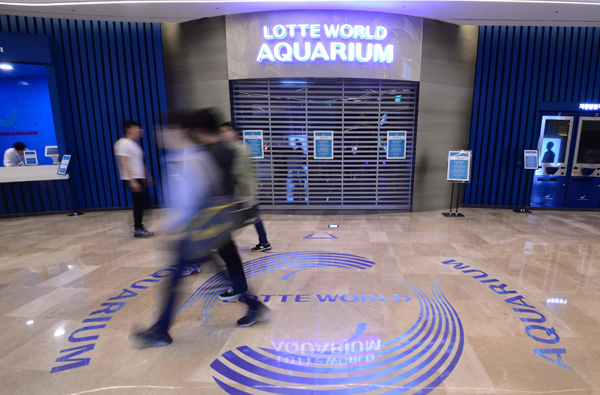 The entrance to the Lotte World Mall aquarium remains shuttered since a fish tank was found to have a crack in December. [NEWSIS]

Lotte World Mall has finally received approval by the Seoul city government to open up its aquarium and movie theater, five months after the facilities were shut down due to safety concerns.

The government on Friday announced that it was lifting the ban after safety inspections were made by industry experts, including professors of architecture.

“The civil safety management advisory team has analyzed the cause of the leakage of the fish tank at the aquarium and the trembling at the movie theater and also reviewed the enhancements and repairs [Lotte has made], and it came to the conclusion that there are no structural safety problems,” the Seoul government said in a released statement. “However, Lotte must regularly post on its website the results of safety inspections and assessments made on major facilities and the building’s structure.”

The Seoul government said it has ordered Lotte to take additional safety precautions such as installing sensors that would detect any leaks or changes in the fish tanks and creating an alert system directing moviegoers to emergency exits in the event of a fire. The elevators, escalators and even doors will be under constant inspection as well.

“We couldn’t ignore the economic aspects like the drop in sales and visitors due to the hold on construction and limited use of space in the past five months, as well as the difficulties that the regional economy and the store owners [running business within the mall] had to endure,” said Jin Hee-seon, deputy mayor for housing policy at the Seoul government. “But safety is our top priority, and so we tried to make the inspection as meticulous and refined as possible.”

The aquarium and movie theater will officially be open for business starting Tuesday, while construction on the concert hall for classical music, which was also on hold, will resume.

Lotte celebrated the approval by announcing several events. Starting today through Monday of next week, the aquarium and the movie theater will be free to visit for nearly 40,000 people.

According to Lotte Corporation, 30,000 visitors will be able to watch 50 major blockbusters for free, including “Kingsmen: The Secret Service,” “Interstellar” and Korean hit “Ode to My Father,” as well as upcoming movies like “Spy,” starring Melissa McCarthy and Jason Statham. The group will give 6,000 people the opportunity to visit the aquarium for free, which it claims is the best in the nation by number of marine species and longest aquatic tunnel.

“From this day forth we will put all our efforts so that even the slightest accident will not occur until the Lotte World Tower is completed next year,” said No Byeong-yong, CEO of Lotte Corporation.

“We will pour all our strength into making [Lotte World Mall and Lotte World Tower] as not only cultural representations that the people can feel pride in, but also as the pinnacle of safety.”

Lotte projected that the resumption the aquarium and the movie theater would not only increase the number of visitors but also create 2,000 jobs. The movie theater with 4,600 seats is expected to attract more than 20,000 visitors daily, while the aquarium is expected to have roughly 4,000 visitors. Lotte also estimated that 5,000 foreign tourists will shop at its duty-free shop daily.

Lotte World Mall has been embroiled in several safety issues since it opened its doors in October. Several construction workers fell to their deaths during the construction of the annexed skyscraper, a crack was found in one of the fish tanks, and moviegoers complained that they felt tremor and outside noise while watching a film. Two visitors were also struck by a glass door, which fell on top of them.