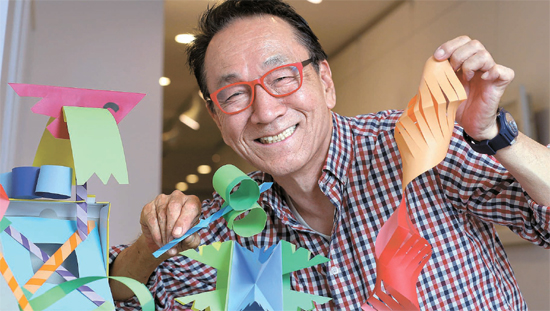 Kim Young-man shows off designs he created folding paper. When asked to demonstrate during an interview, Kim created a bird, a boomerang and an air plane within 10 minutes. By Choi Seung-shik

Each morning, with a piece of paper in hand, Korea’s children waited for him to appear on their television screens.

At the time, he was a morning call for his young viewers, and his signature question, “Who’s still in bed?” let them know that the fun was about to begin.

For more than a decade, since 1988, Kim taught origami, the art of paper folding, on the children’s television series “TV Kindergarten ? One, Two, Three” on the Korea Broadcasting System (KBS).

As one of the program’s regulars, he was known as Mr. Paper Folding.

“I think I was popular among children as much as other TV stars,” he said. “A lot of letters came in from around the country, and it was hard to go to the supermarket because everyone knew me.”

But despite his break from show biz, Kim said his affection for paper-folding hasn’t waned. Rather, he expressed concern that kids today just aren’t interested in that kind of activity anymore.

“This is the arts,” Kim said. “Children learn patience and to develop their senses through the processes of hearing, smelling, touching and seeing.”

The 65-year-old became familiar with origami in his 30s. While living in Japan, Kim observed a kindergarten class one day that his friend’s daughter attended.

“The children made a bird by folding a piece of paper,” Kim said. “It was completely different from in Korea, where students only used paper to cut and paste.”

After that, Kim learned the art of paper folding and even developed his own style. He started teaching at an elementary school in Korea, and later earned a chance to guest star on the TV show. By then, he was 38 years old.

In the first week, the reactions to Kim’s segment were so explosive that he became a regular cast member on the show.

He even hired a personal driver to accommodate his tight schedule.

Over his career, Kim was never replaced, nor did he ever give the same lesson twice.

But eventually, he quietly disappeared from the program.

“A number of cable channels for children launched, and KBS reduced its budget for the show,” he said. “So I left the program naturally. Also, I’d been on it for a long time.”

Kim said he always sets a piece of colored paper, scissors and glue next to his bed so as not to lose a new idea when it comes to him.

When talking about a new way to fold a paper airplane - a new design he recently developed - his enthusiasm made it seem like it was almost as if Kim he were back on his show, forever entrenched in the minds of his former viewers.