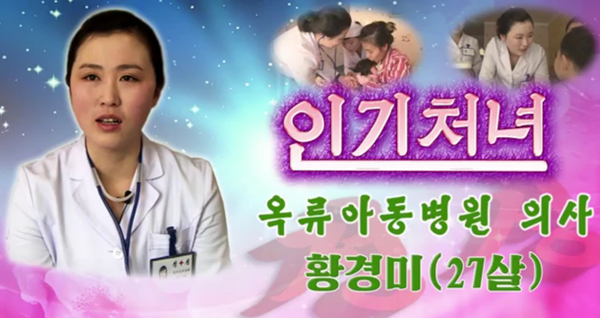 Squash instructor Suh Hyun-ah, 26, is popular among her students for her sense of responsibility and charismatic style. She’s looking for a partner but doesn’t want to date her students because most are younger than she is. When asked what sort of man she likes, she giggles shyly and says she “likes people who play soccer.”

Suh works at the Geumneung Sports Complex in Pyongyang, North Korea’s capital. Her interview, just a little over three minutes long, is the first in a 10-episode video series called “Popular Girls,” created by the Choson Sinbo, a pro-North Korea newspaper published in Japan, and available to anyone on YouTube.

The women featured cover a wide range of professions and include a traffic police officer, a professor, a doctor, a woven-textile factory worker and an inventor.

All the “popular girls” are in their 20s, with the oldest being 29-year-old Kim Un-jung, an English professor at Pyongyang Computer Technology University. 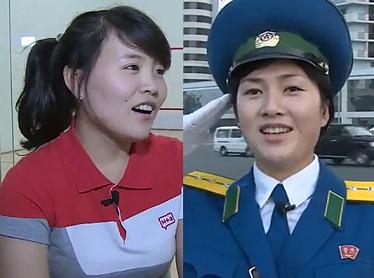 Though the women have their own individual charms, they all share one thing in common: All celebrate the North Korean regime and voice their resolute support for North Korean leader Kim Jong-un and his authority.

Kim Kyung-hae, a preschool teacher at Pyongyang Jung-gu Station Daedongmun, says she chose her job because she “wanted to cultivate children who would make the revered comrade Kim Jong-un happy.”

And when asked her favorite song, Mun Kyung-Shim, an attendant at a Gwangbokji-gu supermarket, states without hesitation: “The General’s Thoughts.”

Additionally worth noting is that all the videos in this series are based in Pyongyang, which suggests a motivation by its officials to promote the city and its level of development.

The video clip featuring the traffic police officer captures some of the capital’s urban development, and expensive black cars can be seen passing behind her.

In the video with Hwang Kyung-mi, a pediatrician at Okryu Children’s Hospital, the facility appears clean, brightly decorated with pink curtains and well-stocked with children’s toys.

Kim Young-su, a professor who teaches North Korea politics at Sogang University, suggested that “even North Korea has realized that this is a difficult era to promote the regime.”

“After Chairman Kim came into power, North Korea’s media propaganda has highlighted individuals and their characteristics through videos rather than in print,” he said.

Before Kim Jong-un, those outside North Korea’s leadership were rarely featured on Korean Central Television. Even solo performances during Moranbong Band concerts were never credited to the soloists because of the axiom that the people come before the individual.

Now individuals and their names are recognized in captions.

“Considering the established nature of the North Korean regime, this is a significant change,” Professor Kim emphasized.

All the videos utilize personal interviews in the same style of popular Korean and American variety shows. Each episode also reflects quality production.

The video of Mun, the supermarket attendant, is filmed with qualities of paparazzi-style documentation.

The video captures Mun addressing customers’ concerns and refilling items from a distance, occasionally interjecting the video with close-up still cuts of Mun accompanied by shutter sounds, a direct reference to the paparazzi.

Cho Byung-hyun, a North Korean specialist and a senior researcher at IBK Economic Research Institute, posited that “these videos were carefully created to show to others.”

She also noted, “Chairman Kim aims toward a different sort of propaganda from that of his father, Kim Jong-il, with the major motivation being to highlight North Korea’s information technology and video skills.”

What experts suggest is that this YouTube series is just one example of a new type of North Korean weapon befitting the 21st century - a new means for spreading propaganda.

North Korean technology, indeed, appears top-notch, particularly given that it has hacked corporate and public agencies in South Korea as well as the California-based Sony Pictures Entertainment, which produced “The Interview,” a fictional film blasted by Pyongyang for mocking leader Kim Jong-un.

Lee Byong-ho, the director of the National Intelligence Service, stated to the Congressional Intelligence Committee on April 29 that, “North Korea’s IT work force is highly skilled, and because these workers could be employed at any tech-related company in China, Vietnam, Laos and other foreign countries, the profession is highly sought after.”

Each video in the series boasts at least 500 views, a huge achievement for North Korea - even the least popular video has more than 3,000 hits. Though there is no “Popular Guys” series, it’s likely that the “Popular Girls” viewership will only continue to rise.

“Even North Korea is adjusting their image to the trends of this generation,” Professor Kim said.