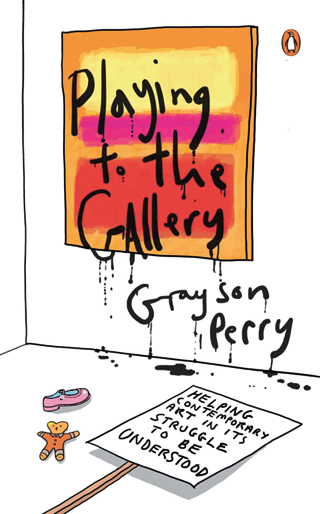 “Playing to the Gallery: Helping Contemporary Art in its Struggle to Be Understood’’


When the British artist Grayson Perry was selected in 2003 for the Turner Prize, one of Europe’s most prestigious art awards, he showed up at the ceremony wearing a dress. That very public display of his cross-dressing is an integral part of his persona - outrageous but amiable, eccentric but unthreatening.

Since then his popularity has only grown, and in 2013 he was invited to deliver the Reith Lectures, the BBC’s annual series of radio talks by influential thinkers. Now they have been published as “Playing to the Gallery,’’ a slender volume with charming illustrations reminiscent of some of Maira Kalman’s New Yorker drawings.

One illustration, for instance, purports to show the floor plan of a museum in a curator’s mind, with a large space set aside for “a dozen supremely good examples of famous stuff to give my institution an easy international reputation and also to sell merchandise in the gift shop’’ and smaller spaces devoted to “drunken conversations at biennales’’ and “what I wrote my doctoral thesis about.’’

Perry’s declared intention is to demystify the inner workings of the art world, from the “frighteningly chic gallery girls’’ in commercial galleries to the “reverential hush around arcane lumps of stuff’’ in those spaces, and the “grandiloquently opaque’’ language that critics, academics and curators use to talk about it.

“If there’s one message that I want you to take away it’s that anybody can enjoy art and anybody can have a life in the arts - even me! For even I, an Essex transvestite potter, have been let in by the art-world mafia.’’

But of course this “anybody can do it’’ attitude is a bit disingenuous, though perhaps not deliberately so. Not everybody can, and among those who try, few will do it as well as Perry or other serious artists. Indeed, toward the end Perry drops his wisecracking persona to address the enduring question of how and why people make art.

His conclusion? Artists cannot help themselves. They are driven to make things in the same way that others are drawn to spiritual pursuits. For Perry, who has spoken about his difficult childhood, the art-making capacity of humans involves “the miraculous ability to transform the traumatic experiences of ... life into a positive.’’ It’s a “noble journey,’’ he writes, and “it’s most important role is to make meaning.’’ It is a surprisingly sincere epilogue in this sophisticated, witty takedown of the contemporary art world.

“Playing to the Gallery: Helping Contemporary Art in its Struggle to Be Understood’’