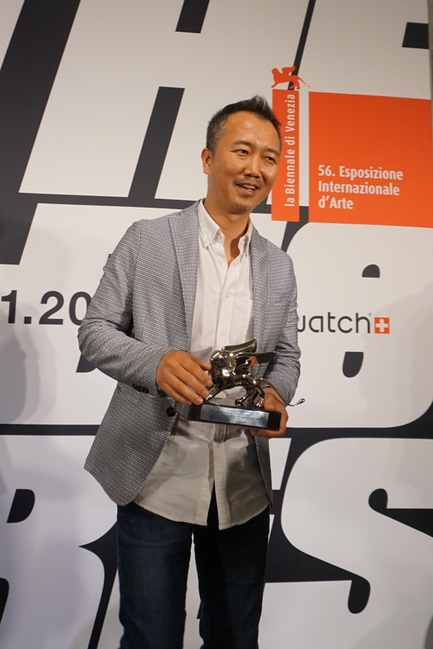 Korean film director Im Heung-soon won the Silver Lion for a promising young artist in the 56th International Art Exhibition, one of the main shows of the Venice Biennale, which kicked off on Saturday.

“I thank the many women who have worked and lived up to their convictions,” Im, 46, said during the award ceremony in Venice on Saturday. He added that the feature was inspired by his own mother, who has worked at a sewing company for more than 40 years and his sister, a department store staff member.

The Jury was comprised of Naomi Beckwith of the United States, Sabine Breitwieser of Austria, Mario Codognato of Italy, Ranjit Hoskote of India and Lee Yong-woo of South Korea. Lee served as president of the Gwangju Biennale Foundation from 2011 to 2014 and is now president of the International Biennial Association.

The international exhibition was curated by Okwui Enwezor, a Nigerian art critic and museum director. He is the first African to curate the Venice Biennale show and was the director of the 2008 edition of the Gwangju Biennale, Asia’s main biannual art show.

The Golden Lion, the top honor, for best artist in the international exhibit, went to Adrian Piper from the U.S. for her installation of hospitality desks inviting participants to commit to one of three rules.

The Gold Lion for best national participation was awarded to the Republic of Armenia for its pavilion presenting works by the Armenian diaspora on the 100th anniversary of the mass killings of people from the country by Ottoman Turks.

The prominence of women seems to be a characteristic of this year’s Venice Biennale with more female artists representing more nations than ever in national pavilions, including Joan Jonas for the United States, Fiona Hall for Australia, Irina Nakhova for Russia, Sarah Lucas for the U.K., Chiharu Shiota for Japan, Pamela Rosenkranz for Switzerland and Camille Norment for Norway.

All were from the more established Biennale participants in the Giardini, around a third of the 89 national pavilions.

At the nearby Arsenale, which hosts part of the main group exhibition, Nigerian-born Enwezor does not play up being the first African curator at the Biennale.

His career has focused more on periods, namely art of the 20th and 21st centuries, than geographies. His show, “All the World’s Futures,’’ is globally inclusive with artists from 53 nations, with no attempt to represent African art as such.

He said he has spent his 25-year career “working with artists across every cultural context. I am interested in their ideas and concepts, whether they are Indian, African, European, Asian, whatever. In that sense it is quite unremarkable.’’

On the other hand, he conceded that the Biennale “for better or for worse is an exclusive club,’’ noting that “not that many female curators’’ had been tapped in its 120-year history. “To be part of this historical trajectory, to be part of an important aspect of our discipline,’’ he said, “that is deeply meaningful.’’