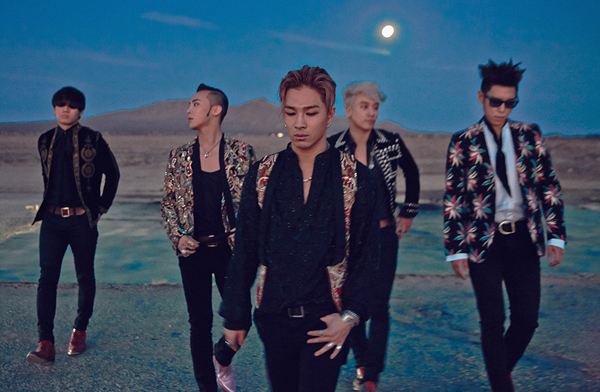 They wear matching clothes, have well-groomed hairstyles and dance using predictably choreographed moves. They use the same method to attract female fans, first coming off as wholesome boys-next-door and suddenly turning into suave gentlemen.

Although today’s boy groups are generally thought to have better dancing and singing skills than those in the ’90s, they are criticized for maintaining the same style and content, which is often cited by critics as one of the reasons many of them are so short-lived.

The group proved that a boy band with a bad boy image could succeed in the Korean music market. Due to the group’s aesthetic, even if the members cause problems, they are forgiven - because they’re Big Bang.

One of the key secrets behind the boy band’s long-running, successful career is their diversity. Group leader G-Dragon is working as a music producer. He has also gained an international reputation for his fashion sense. Main vocalist Taeyang makes the team stable with his singing and rapper T.O.P has diversified his activities, getting recognition as a serious actor. Vocalists Daesung and Seungri are also actively pursuing their singing careers in Korea as well as in Japan.

Remarkably, each member’s solo activities are just as influential as when the entire group comes together as Big Bang.

The group released two new songs, “Loser” and “Bae Bae,” on May 1, which recorded the first and the second places on various music charts.

Q. Why did the group decide to release a single each month instead of unveiling the entire album?

A. Taeyang: The decision was made by our agency’s CEO [Yang Hyun-suk]. Up until a month ago, we couldn’t decide on whether to unveil the new songs in a regular album or to release them as several singles over a period of time. Since we were pretty satisfied with the new songs, we wanted to reveal them in a regular album, but we also wanted to shoot more music videos. So we decided to release songs separately as singles, which would give us time to shoot music videos and perfect each track.

G-Dragon: When we debuted, our biggest goal was to make ourselves known to the public. Instead of doing what we wanted to do, we received songs from songwriters and did what we were told to do. We had a hard time at first because we didn’t have a specific type of music that we pursued. Right now, our band has our own music style that we strive for, which makes us enjoy making music.

What’s the style of the upcoming album?

Taeyang: The album shows the usual music style of Big Bang. You will understand what I’m saying if you listen to all the new songs that will be released each month. Every piece has its unique characteristic, which means the follow-up songs will be different from “Loser” or “Bae Bae.”

G-Dragon: Being unveiled at first does not necessarily mean they are the best or the worst. We can’t guarantee that the follow-up songs will be better. Every song is equally good, so we are working more on how to express them on stage.

Does the group have hard time deciding on what songs to release whenever it unveils a new album?

G-Dragon: We already released a lot of songs and are highly loved by public. This makes us constantly think about what to say and what not to say [in our lyrics]. We always think deeply about the words we use to appeal to the public. Constantly thinking about the issue will be very helpful for the group.

The new songs are evaluated to be pop music.

G-Dragon: We are pop musicians, so it is right for us to do pop music. But we never intentionally wrote pop songs. When performing solo, if I think a song is right for me, I can pursue the song without thinking too much about the public’s response. But when performing under the name of Big Bang, we mostly focus on songs that sound good to the public, as well as to us.

Why did Big Bang sing “Loser” when you are all winners?

G-Dragon: We have the real winner in our company [YG Entertainment] (laughs). The song was written based on our experience. We may seem like winners, but we want to say that we are also ordinary people. Just like everybody else, we laugh at funny things and cry when we see something sad. The only difference is that we have different jobs.

T.O.P: We may look fancy on the outside, but once we get off the stage we sometimes get depressed just like ordinary people. We wanted to share that through the song.

How did Seungri get to sing the chorus?

Seungri: During a concert, Jiyong [G-Dragon] mentioned that he gave me the part because he likes me, but I think the chorus would have sounded just as nice regardless of who sang it. Maybe Jiyong’s feelings for me affected his choice in giving me the role (laughs).

G-Dragon: We often scolded Seungri’s attitude in the past. He was different from the rest of us in that he is the first child in his family, so it seemed like he was raised like a prince. At first, he didn’t eat kimchi but only ate meat. He also couldn’t grill meat [a duty that is often given to the youngest member of a group in Korea]. We often scolded him because he didn’t set out spoons and chopsticks when we ate out, but we have no reason to scold him these days.

T.O.P: In some ways, he seems to be the most mature one out of all of us.

Seungri: All of this happened around seven to eight years ago. I can feel that I’m being loved by the members now.

Why does Daesung cover his face with his hair?

Daesung: Maybe that’s why I often hear I’ve become handsome these days. I don’t know whether to accept it as a compliment or an insult. I need members’ help on the stage since I cover my eyes with hair (laughs).

I heard that G-Dragon went through a slump.

G-Dragon: It wasn’t the kind of slump that made me sad or agonized. I often felt too tired and wasn’t able to come up with good songs. I deeply thought about what the problem was. It may sound a little cheesy, but the members were the solution to my problem. I originally felt that I had no muse. After realizing that I’m a member of Big Bang and that I belong to the group, everything started to work out really well. It seems like I felt a little lonely after the members performed solo, but once all of us gathered as Big Bang, I was able to get back on track.

What do you think is the driving factor that made Big Bang last for almost 10 years?

T.O.P: We never got in a fight because there is nothing to fight about. All of us don’t have many friends, so we only have each other to talk to.

Daesung: When I encounter a difficulty, I rely on the members of the group. When I caused the huge [car] accident [in 2011] I had a hard time getting over it, and I depended on the members for help.

Taeyang: When we were receiving training before out debut, our agency was undergoing difficult time. Under such environment, I tried to learn as much as possible. Seeing these days’ trainees who wish to become K-pop stars, I feel like they are not working hard enough.

G-Dragon: I think we are doing our best to maintain our popularity for a long time because we had such a hard time. Before our debut, we were not allowed to spend more than 5,000 won ($4) for a meal. If we worked out really well from the beginning, I don’t think we would have been able to keep up our passion.