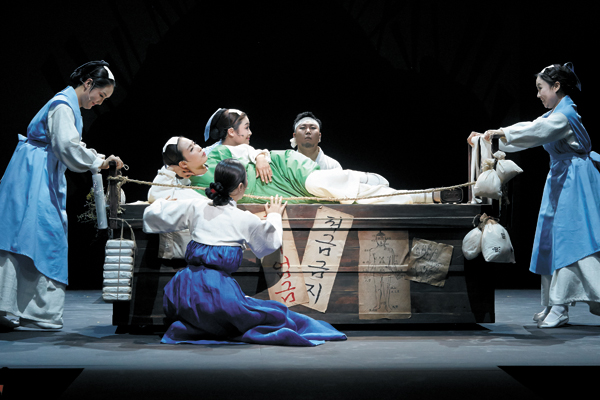 The changgeuk “Madame Ong,” a traditional Korean opera performed in the pansori narrative singing style, is heading to Paris.

It is scheduled to be staged from April 14 to 17 at the Theatre de la Ville, a 150-year-old historical venue frequented by world-renowned performing arts directors like Peter Brooke, Robert Wilson and Pina Bauch.

Theatre de la Ville’s annual lineup is said to set the latest trends in the performing arts world. About 400,000 people visit the venue from all over the globe to watch performances.

It is the first time for a Korean performing arts group to be officially invited to this dream stage.

“Madame Ong” is the outcome of a National Changgeuk Company project to turn seven pansori into a changgeuk. Playwright and director Ko Seon-woong rewrote the story of the folk tale “Song of Byun Gang-soe” and transformed it into a traditional opera last year. 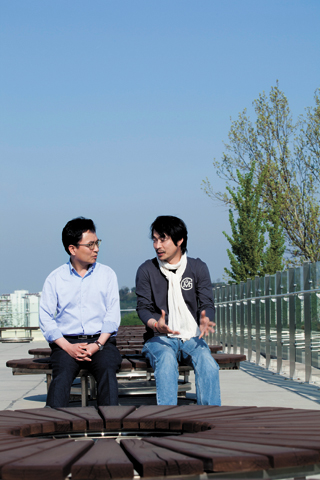 Ahn Ho-sang, left, the CEO of the National Theater of Korea and the producer of “Madame Ong,” talks with Ko Seon-woong, the show’s playwright and director, about how they came to create the sell-out changgeuk, or traditional Korean opera, based on an adult folk tale. By Jeon Ho-seong

Despite being a genre that critics have considered as dull in the past, “Madame Ong” held six performances that saw 90 percent of seats selling out on average.

Currently, a “compressed version” of the performance, which will be shown in Paris, is being staged at the National Theater of Korea. It will run through to May 23.

“At the end of last year, artistic director Emmanuel Demarcy-Mota [of the Theatre de la Ville] suddenly came to visit and said he wanted to invite our changgeuk if the piece was good enough,” said Ahn Ho-sang, 56, the CEO of the National Theater of Korea and the producer of the show.

“I told him about ‘Madame Ong’ and an official from the Institut Francais, a French cultural center to Korea, who was with us strongly recommended it, saying that he really enjoyed the show.”

Ahn explained that Demarcy-Mota invited the changgeuk to Paris as soon as he watched a video recording of it.

“On condition of reducing the scale, the Theatre de la Ville decided to support a large part of the cost for us as well,” Ahn added.

But will the opera that is based on a folk tale with adult themes appeal to the European audience?

“ ‘Madame Ong’ is very Korean,” said Ahn, explaining why he offered the show to the Parisian theater as soon as it showed an interest in the country’s traditional opera.

“I thought the French audience would prefer something Korean. Pansori has been introduced in France several times, but never a changguek. I thought if we are going, then we had better go with a very Korean changgeuk,” said Ahn.

He also pointed out that the humorous aspects of the folk tale were key to his decision.

“It’s also quite similar to French comedy,” Ahn explained, “so many foreigners who saw the show gave us positive feedback.”

Although the story is based on a folk tale and its humor is somewhat native to Korea, Ahn said the charm of pansori will captivate the foreign audience because the “linguistic subtleties of pansori are better than that of Shakespeare’s. 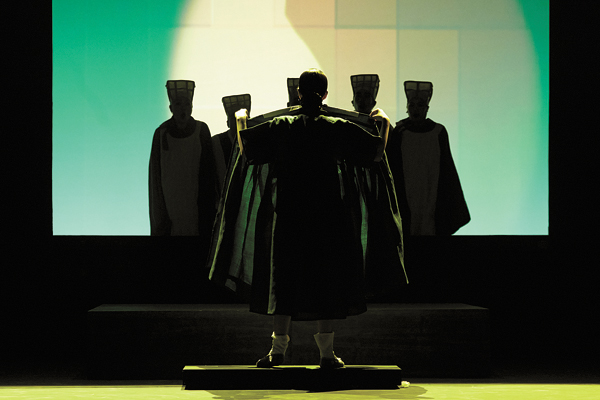 “Once foreigners get absorbed in the taste of words and its rhythm, they seem to accept our culture as a whole,” he said

The scriptwriter, Ko, chimed in, saying he could not stop slapping his lap in amusement when he was rewriting the piece.

“I couldn’t believe how beautiful the words are in this piece,” said Ko. “I’ve added some parts, but I didn’t touch the essence.”

The collaboration between the two came about when Ahn casually asked Ko if he wanted to work on a changgeuk one day when they met in the lobby of the National Theater of Korea.

Ko was visiting to watch “Seopyeonje,” another changgeuk, which was being staged at the time.

“He was among the candidates,” said Ahn.

“We had to be experimental yet had to reduce risks, so we were relying on esteemed changgeuk directors like Han Tae-sook or Yoon Ho-jin.

“But as we were aiming for a younger-spirited changgeuk, we were looking for younger directors. Then I bumped into Ko and just asked as a throwaway remark, but he caught it and here we are.” 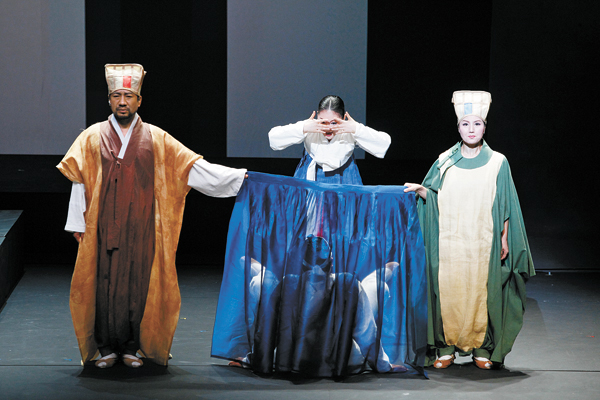 Ko said that he had always been interested in directing changgeuk one day. As soon as he received the request, he thought about the story of Byun Gang-soe, which centers around a man with a legendary libido.

Ko then decided to differentiate his piece from the previous experimental traditional opera works produced by the National Chaggeuk Company.

“I wanted to present the orthodox changgeuk well,” said Ko.

“I wanted to tell a story that’s simple but sympathetic and wanted to rediscover changgeuk’s existing charm rather than challenging myself to create something different.”

But since the story centers around a womanizer and Madame Ong, described as a lewd lady about town, Ko had to make sure it was not portrayed inelegantly and instead focused on creating a story that would repair the damaged reputation of the tale in Korean people’s minds.

Recreating “Madame Ong” was not an easy road for Ko. In the original story, every man who has sexual intercourse with Madame Ong, or Ongnyeo as she is known in Korean, dies one after another and she gets kicked out of town.

Then she meets Byun and settles down on Mount Jiri.

Unlike other men, Byun does not die as he has strong sexual stamina. However, his laziness drives him to his eventual death when he cuts down a jangseung, or a traditional Korean totem pole usually erected at village entrances, instead of trees when Ongnyeo asks him to go fetch some wood for a fire.

He angers the jangseung spirits and ends up dying. Everyone who attends Byun’s funeral also perish and the whole neighborhood falls into chaos.

Ko found this problematic, so he turned the folk tale around and decided to go for a different, climatic ending.

By giving Ongnyeo a secret about her birth, he was able to set up an interesting form of tension and ended the story by showing that sometimes a strong will to live goes against fate.

“I had to make the story based on the woman,” said Ko.

“Because of Korea’s patriarchal system, the story was named ‘Byun Gang-soe,’ but it’s a story about this woman who lived through a time of ordeal. Many regard the story as just foul talk. But the original story is also about love.”

Ahn was appointed as the CEO of the National Theater of Korea in 2012 and adopted the “seasonal repertory system” for the first time in a Korean theater.

During the past three years, the institute has focused on creating new works to present through its seasonal repertory.

“The response was the most enthusiastic,” said Ahn.

“Tickets sold out and we had to add jump seats,” he continued. “The goal for that work was to turn changgeuk into a contemporary performance, and people responded to that. Now, I can proudly put forth ‘Madame Ong’ as the most successful work from the past three years. The text and music for the new version is even better.”

The National Theater of Korea is doing well internationally with the work it has produced over the past three years. Other than the National Changgeuk Company’s “Madame Ong,” the National Dance Company of Korea’s “Tornado” has also been selected as this year’s opening piece for the Cannes International Dance Festival and the company will also coproduce a piece with the Theatre National de Chaillot.

“The artistic director of the Lincoln Center Festival said that 20 percent of its audience recognize Hangul, the Korean characters,” said Ahn.

“As Korea raises its status in the world, more and more people started to pay attention to our unique culture and we should correspond to that demand. Those who enjoy Japan’s kabuki culture also have a thirst for Korean culture. They wonder what our cultural traditions are. That responsibility I believe is with the National Theater of Korea and that’s why we are going out there with answers.”