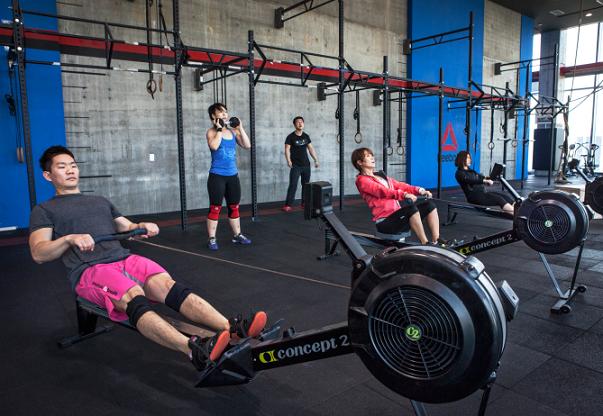 Members of Reebok CrossFit Sentinel undergo an intensive workout at the center in Yeouido, western Seoul

On a recent Friday night, when many were heading out to drink away a stressful week, another group entered a building filled with bars of a different sort.

After a short warm-up, the members jumped into the “Workout of the Day,” or WOD, a series of exercises completed as a group in a particular sequence. In this case, the WOD consisted of five different movements with a 30-second rest in between each.

Not that it made things any easier.

The members moved from Battle Ropes - swinging heavy ropes up and down for thirty seconds - to Med Ball Russian Twists, during whichthey twisted their torsos while holding weighted balls. The third exercise, Ice Skaters, had them jumping from side to side. The group was gasping for air by the time the “Frog Jumps” began, saying that their thighs were on fire. Most were exhausted by the final exercise, an interval on the rowing machine.

Then they repeated the sequence three more times.

The workout was part of the Boot Camp program by Sentinel, the largest CrossFit affiliate in Korea. CrossFit refers to the popular strength and conditioning program that incorporates elements from high-intensity interval training, Olympic weight lifting, gymnastics and other exercises. Sentinel’s Boot Camp program is based on the philosophy and movements of CrossFit but uses exercises that are less technical and exclude weight lifting. The program is gaining traction in Korea as more and more people opt to enjoy fitness in a fun and effective way. Since the first CrossFit Sentinel opened in Hannam-dong, central Seoul, four more “boxes” - CrossFit’s term for a gym - run by Sentinel have opened in popular spots like Daechi-dong, Yeouido and Euljiro.

Just three years ago, Sentinel was known by only a handful of fitness enthusiasts. Today, the gym boasts more than 3,000 members. Different affiliates have also emerged to cash in on CrossFit’s popularity.

At first glance, it seems strange to see people voluntarily joining such grueling workouts. But the members say they love the heavy training routines.

“At first I felt like my lungs are on fire and just generally feeling like I’m going to die,” said Kim Young-geun, a 36-year-old man who started working out at Sentinel IFC in Yeouido last July.

“But there is something amazing about finishing something you thought you’d never even be able to make it through, and sharing that experience with a handful of other people each time is really great.”

Located in International Finance Center (IFC), a commercial and shopping complex in Yeouido, members of the box that Kim attends are mostly bankers or workers at nearby securities and insurance companies.

Kim said that the group element helps the members forge a strong bond with each other.

“People here are really close because they do the workouts together and compete with one another,” he continued.

“Though many are office workers working at financial companies here, there are people from all walks of life - moms, dads, students, young professionals. There are people who are super fit, and there are beginners like me.

“But when we work out, bonds of camaraderie are formed by trying hard and challenging each other. We all try to help each other lead happier and healthier lives.”

He comes to the box three or four times a week before or after work.

CrossFit Sentinel said that the sense of togetherness is one of key features of many CrossFit gyms.

“In other gyms, people need to motivate themselves,” said Ahn Hyung-cheol, a manager of the IFC gym.

“But here, members cheer each other on and this translates into them working out more often,” the manager said.

Each box hosts different events and competitions to boost the sense of community and keep people motivated.

At the event, people go through a yoga class while a DJ spins fast-paced music in the dark studio. During one recent session, some 80 participants also donned glow-in-the-dark bracelets and body paint.

“We always try to come up with different ideas to get members together and ‘Midnight Flow’ is one of them,” said Ahn.

Sentinel’s classes draw a substantial number of female participants, with half those enrolled in the Boot Camp program being women.

Heather Park, an IFC Sentinel member, said that the sense of achievement she gains outweighs the pain.

“At first, you might be little intimidated,” she said. “But when you find yourself finishing one round and another, you get more courage and keep going with it.”

She also added that the grueling workouts help her stave off stress from work.

“While working, I am sometimes put under a tremendous amount of pressure,” she said.

“But after I finish the workout, I feel more refreshed.”

She added that joining the box has also given her a community outside of the daily workouts.

“I go to mountain climbing or participate in a marathon competition on weekends with other members, which is really nice.”

With five centers under its brand, Sentinel puts a different focus on each gym.

“There are a number of expats in Hannam-dong,” said Ahn, the manager. “So, we have English-speaking trainers at our center there.”

All the affiliates, however, emphasis the health and safety of their members.

Sentinel made an agreement with an athlete training center run by a Kookmin University professor to ensure the quality of their classes.