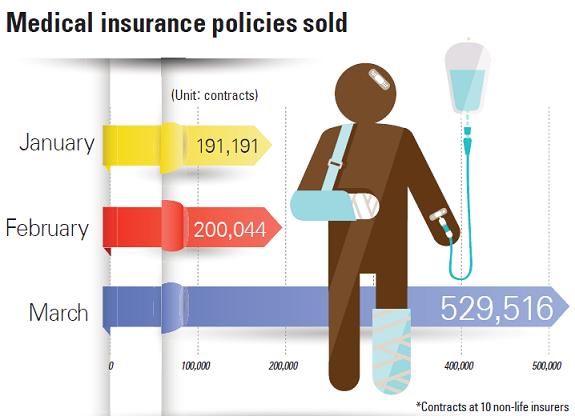 In late March, a 29-year-old office worker named Shim started to subscribe to medical insurance. He was told by his insurance agent that he needed to sign up for the product because starting in April, his co-payment would double.

The Financial Services Commission (FSC) in February announced it would revise the bill on insurance law to make co-payments at least 20 percent of the cost of medical services, compared to previous regulations that allowed co-payments of 10-20 percent.

The financial authority justified the move by saying low co-payments encourage subscribers to get unnecessary medical treatment or services and that results in higher premium costs.

However, insurers still sell medical insurance with the 10 percent co-payments because the revised bill has been approved only by the Regulatory Reform Committee made up of experts from academia, business and government. The FSC on Thursday announced it will implement the new co-payment standard in September, five months later than planned.

“As I was told that I didn’t have much time, I didn’t have the opportunity to meticulously compare different insurance policies,” said Shim. “I feel like I was duped in a marketing scheme.”

Insurance companies were the only ones to profit from the government’s indecisive policy implementation.

“Insurance companies are likely to hold large-scale marketing ahead of September,” said an insurance company official, who wished not to be named.

The government faces heavy criticism that its policy execution resulted in profits for insurance companies and confusion for consumers. In fact, there have been questions raised since the FSC’s decision to standardize co-payments, which was deemed contrary to the interests of consumers. 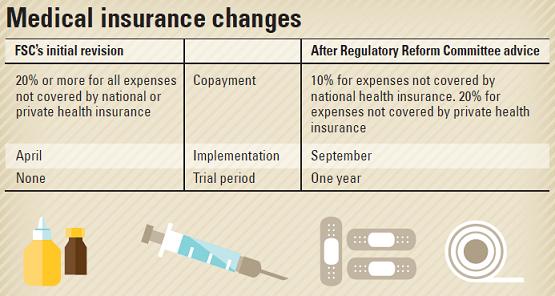 The FSC said consumers would not lose money because the move would lower monthly premiums. Yet, of 30 million private insurance subscribers, less than 1 percent chose policies with 20 percent co-payments, indicating the vast majority are willing to trade higher premiums for lower co-payments.

Even the government’s reform committee that reviewed the revised law was skeptical. The reasons the committee did not give the green light right away was because it saw that the FSC needed to collect input from stakeholders, including medical institutions, insurance companies and consumers, since a majority of the population subscribes to private medical insurance.

The reform committee requested a revision of the revised bill, which changed many of the details.

For example, if a patient received a medical bill of 1 million won ($915), that person would have to pay 200,000 won out of pocket, while the insurance company would pay the remaining 800,000 won. But after the committee advised the FSC to make the adjustment, the co-payments would be 20 percent for those not covered by the national health insurance and 10 percent for those who are.

The reason the FSC limited the co-payment on bills covered by national health insurance is because there would be less manipulation, since medical treatments undergo scrutiny by the Health Insurance Review and Assessment Service.

Additionally, the committee has told the FSC to include a clause placing a one-year limit on the co-payment rates, since it is unclear whether standardizing the ratio at 20 percent will actually help reduce insurance premiums.

It said it is giving the commission the authority to come up with a measure that would strengthen scrutiny of insurance use by subscribers, which it considers a more fundamental solution to the problem of rising costs.

The FSC also is working on a measure for the Health Insurance Review and Assessment Service to check the appropriate level of insurance coverage on expensive procedures such as MRI and CT scans. But it also is unclear whether that will happen because of strong opposition from the medical community.

“There’s a strong possibility the issue could become a hot potato when it is discussed in the National Assembly,” said an FSC official.