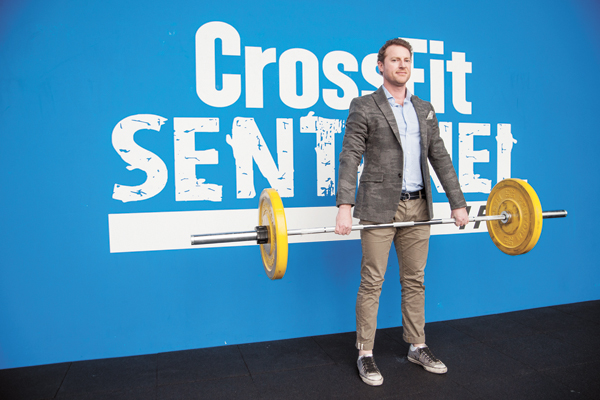 Lachlan Winner, co-founder and co-owner of Reebok CrossFit Sentinel, established Korea’s first CrossFit affiliate out of a dissatisfaction with conventional gyms, which he felt were too focused on building bulging muscles rather than functional strength.

He thought that CrossFit offered a kind of fitness that could actually help everyday people, like himself.

Since its creation in 2012, Sentinel has become the nation’s largest CrossFit affiliate with five centers and more than 3,000 total members.

The Korea JoongAng Daily sat down with Winner to discuss the Boot Camp program and the recent popularity of CrossFit in Korea.

Q. What led you to start the CrossFit business?

A. A few of my friends and I founded the company. We started it because we wanted a place where we could train in the way we want to be trained. At the time, I was working as a lawyer. While I was working … I was sitting all day. So when I was trying to train, I was getting injuries. I wanted to train in a different way. When I would go to other gyms, the gyms wouldn’t like me rolling around on the floor and doing different movements because it was different from the way other members of the gyms did things. They were really vocal about telling me that I couldn’t do it. After being told that, my friend and I decided to create a space where we could [train the way we wanted]. If anybody had the same mind as us, they could come and join. That was the original beginning.

Could you explain the Boot Camp program?

CrossFit is an American product that we licensed and the Boot Camp program is our own product. Boot Camp incorporates more mobility and stability. What we found was that we can tailor our Boot Camp program for different demographics. The Hannam-dong box [the term used to refer to CrossFit gyms] has a number of young ladies living nearby, and our center in Yeouido has lots of office workers. So, we can create Boot Camps to fit our demographics and fit their needs much more than what we can for CrossFit.

How is a Boot Camp class different from a CrossFit class?

There is a prerequisite before you take a CrossFit class. But for Boot Camp, anybody can come in and go straight into the class. Boot Camp doesn’t have so many technical lifts and technical movements. So we put mobility and stability before performance. In every one of our programs, you go through a warm-up phase and then move into skills and a conditioning phase. We also found that people come to CrossFit and it’s their sports. They train here and this is where they perform. But [people who do] Boot Camp come here to get their body stronger so that they can perform outside. For example, mothers come here to be able to do something functional like picking up their children and moving stuff around. So, this is supplement to their life whereas CrossFit is more of sports.

Why do you think that mobility and stability is important in the context of Korean society?

It is so important in Korea … because Koreans work very long hours in the office. And the economy here is built around cooperation. So, it is no longer an agrarian state where everyone was outdoor working. These days, more and more people are inside. When you sit, your body responds. For example, if you are sitting for twelve hours, your body starts responding and thinking it should grow into this [sitting] position. Connective tissue and muscles react and you become dysfunctional. And if you are dysfunctional, it starts taking away from the enjoyment of your life.