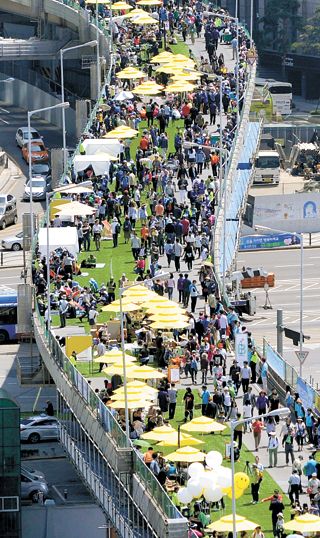 A walk in the park - Seoulites stroll along the Seoul Station Overpass in central Seoul on Sunday as it was temporarily turned into a picnic place with artificial turf and parasols. The Seoul Metropolitan Government is planning to change it into an elevated park like the High Line in New York City by 2018. [NEWSIS]

An overpass that temporarily turned into a park in central Seoul on Sunday welcomed about 48,000 visitors, including a group of demonstrators protesting the city government’s plan to turn the elevated structure into a permanent public space.

The Seoul Metropolitan Government provisionally blocked traffic from the Seoul Station Overpass on Sunday and placed artificial turf and parasols on the road to form a picnic area from 11 a.m. to 4 p.m. Sunday. The move was an effort to promote the local government’s plan to set up a park on the overpass in a style that is similar to New York City’s High Line.

Street food stalls, food trucks and second-hand bookstores were set up in the area while band and B-boy performances also took place.

But the first scene welcoming visitors was not the beautifully decorated overpass in sunny weather but protestors of the plan to turn it into a park.

At around 10 a.m. on Sunday, about 300 merchants from Namdaemun Market, which is located on the east side of Seoul Station, gathered around the eastern entrance of the potential public space, placing banners that read “No Seoul Station Overpass Park” on an adjacent pedestrian overpass.

The merchants claim that closing the overpass to traffic will lead to a decrease in the number of customers who access their market.

An additional crowd of people claiming to support the plan gathered on the western side of the structure. They also attached a dozen banners, one of which read, “We welcome the park that will activate the underdeveloped area around Seoul Station.”

The protesters occasionally raised their voices but there were no physical conflicts as they did not venture up to the overpass.

The city’s Mayor Park Won-soon, who originally proposed the idea, paid a visit to the area at around 12 p.m.

“As we will block traffic to the overpass, we are planning to build a new road coupled with a development plan in the area north of Seoul Station,” said Lee Geon-gi, the vice mayor for administrative affairs on Thursday. “We will also form a negotiation team to talk to Korean National Railroad (Korail), [the owner of land north of the Seoul Station], in the first half of this year.”

The process is not expected to be easy, however, as Korail also said Thursday that it is against the plan. It said that creating a new road might hurt the image of Seoul Station or restrict better use of land because the road may go through the area.

The local government is trying to support those who may suffer any losses due to the development. The city government decided to provide 500 billion won ($460 million) to Namdaemun Market, for example.

Seoul’s government aims to announce the winner of a design competition for the new park on Wednesday. Mayor Park said at the overpass on Sunday that construction on the park will be completed in 2018.