The model, however, was decidedly amateur - just 20 days old.

Despite the high cost of such shoots, Korean parents do not hesitate to break the bank if it means capturing their baby’s early moments. 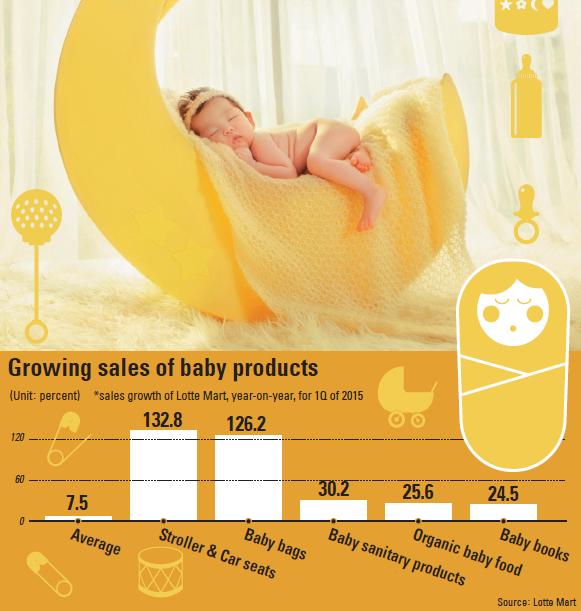 “The photoshoot package was expensive, but I feel as though it was worth it,” said Shin Eun-sun, a 27-year-old mother with her three-month-old girl at Baby U, a luxurious infant portrait studio in Cheongdam-dong, southern Seoul.

“I’ll buy another package for my second child if I have one.”

Shin paid 1.42 million won ($1,299) for a series of four photoshoots: one of herself while pregnant, another 20 days after her daughter was born, again on her daughter’s 100th day and finally on her first birthday.

Baby U studio has a total of nine locations, with its headquarters in Cheongdam-dong and a branch in Los Angeles.

The studio in Cheongdam-dong is a four-story building with each floor housing about 30 stages for various themes, from a European palace’s bedroom to a library. Each stage includes themed costumes, shoes and accessories.

Prices vary depending on how many photos and themes parents choose for their album.

Parents can also purchase additional frames for their pictures, schedule family photoshoots or even have the company shoot a video of a child’s birthday party.

Parents who are committed to documenting their child’s early years can opt for a so-called growth album, where a studio will do a series of shoots from birth to a child’s first or second birthday, collecting the best photos in a book.

“The biggest reason why I chose this studio despite the expensive price was its various concepts and stages,” said Kim Min-ji, a 29-year-old mother who paid 1.62 million won for a package for her three-month-old daughter.

“I didn’t have the chance to get these kinds of photos taken of my first child, who is now 8 years old, so I decided to get this as a present for my second.”

Parents do very little during the actual photoshoots. An assistant makes the baby giggle for the photographer, and also changes costumes and items every time they move to a different setting.

Yoo Seong-ok, the owner of the Baby U, said she thinks Korean parents choose the expensive photoshoots not only to mark their baby’s special days, but also to make a memorable event for the whole family.

“Baby photoshoots in Korea used to just be for traditionally meaningful events, like the 100th day or first birthday,” said Yoo.

“But mothers today want to give a special experience to their children and make their child feel like the center of attention. Many families also love to get their photo taken together every time they schedule a baby photoshoot, which can serve as a documentary of the family.”

With business booming, many people are flocking to the market.

Compared with other start-ups, portrait companies are relatively easier to found because they require only a capable photographer and a rented studio.

Not all studios succeeding

With the surge of baby studios opening in the country, some have been forced to close due to excessive investment or poor management.

Piace Studio was one of those companies, once considered one of Korea’s top 3 baby studios with a variety of luxury themes and many branches nationwide.

In 2014, the owner of the studio shocked the country when he declared bankruptcy and vanished - without returning the lump-sum payments he received from parents.

At the time, many baby studios, including Piace, offered customers a discount if they purchased a photoshoot package in advance and in cash.

According to the police, in September 2014, some parents appeared at the studio’s headquarters in Ilsan, Gyeonggi, for their scheduled photoshoot. The managers told them their photographer hadn’t shown up and asked them to reschedule.

Parents soon discovered that the studio’s owner had already fled due to bankruptcy. Other branches of the studio soon closed, and the owner was arrested in October 2014. He is currently awaiting trial. “We estimate at least 4,000 customers lost their money due to the contracts with the Piace Studio,” said Kim Ji-hun, a representative of the victims. “Considering each customer bought a package worth at least 1 million one, the total amount lost tops 4 billion won.

“About 2,000 of them filed a criminal lawsuit against the owner” he said. “But we gave up demanding compensation from him, as we found he already had nothing left.”

Kim, a 33-year-old father of two children, said he also lost 1.09 million won on the package that he bought for his second child a month before he was born.

“There were hundreds of pregnant mothers who bought packages in advance, and they cried after hearing the news of the studio’s bankruptcy,” Kim said. “They said they felt as if their babies were victimized before they were even born.”

Still, the parents didn’t give up on their desire for a photoshoot. After the media reported on Piace’s bankruptcy, a swarm of owners from other studios approached the parents and told them they would offer their packages at cheaper prices.

“Many baby studios’ owners joined our online community and offered their packages at cheaper prices, in the name of ‘donation,’” Kim said. “Although we knew that they were just trying to earn money by taking advantage of this incident, most of parents - including myself - paid additional money, about 400,000 or 500,000 won, to purchase new packages from them.”

Although the latest data says the Korean economy is struggling with slowing consumption, manufacturers of baby products have yet to feel a squeeze. Instead, their sales are increasing.

According to 11Street, a leading online shopping mall, its sales of baby and kids products has gradually risen since last year, and now surpass 70 percent of its entire sales, an employee of the company said by phone.

Lotte Mart, one of the country’s major hypermarkets, announced in April that its overall sales declined 3 percent in the first quarter of this year year-on-year,

Economists and sociologists in Korea call the children enjoying these luxury products “golden kids,” whose parents shower them with gifts despite the slumping economy.

“In the depressed Korean economy, it is impossible for many parents to purchase an expensive house for themselves, but it is not that difficult to buy luxurious toys or baby products for their children,” said Lee Myoung-jin, a sociology professor at Korea University.