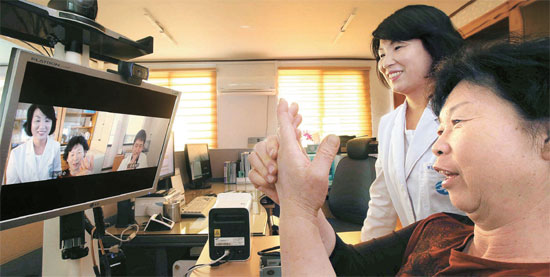 Kim Yeong-suk tells a doctor about her physical ailments using telemedicine at a health care center in Hongcheon County, Gangwon. By Oh Jong-taek

Kim Yeong-suk, 60, shuffled into the health care center near her home complaining of a prickling feeling throughout her body. Having suffered from high blood pressure for a decade, Kim worried that her symptoms meant things were getting worse.

One of the head nurses at the center in Hongcheon County, Gangwon, drew a blood sample and examined her blood pressure, temperature, cholesterol and blood sugar. A few minutes after the nurse entered the data, the doctor arrived - on a large screen in the center of the room.

“You look better than the last time!” said Kim Yong-bin, a doctor from a larger health care center in a nearby village.

“Your blood pressure looks great. Nice job! Do you feel dizzy in any way or get cold sweats?” the doctor asked.

He reassured Kim that her pain had nothing to do with her blood pressure. Only after he gave her a prescription and advised her to drop by next week did she let out a sigh of relief.

“I used to travel an hour away to physically reach him in town,” Kim said. “The long distance meant I wouldn’t make the trip at all, so I’d find myself with even higher blood pressure.”

But now with telemedicine, the use of telecommunication technology to provide health care from a distance, Kim said she feels more confident about her health because she’s able to receive more consistent treatment.

Long-distance medical treatment was first made available in Korea for citizens in rural areas in 2009, with telemedicine pilot projects in 30 areas nationwide.

But telemedicine was initially controversial, with opponents claiming that doctors were unable to provide meaningful care from a video screen and that the system would lead to legal disputes over medical bills.

In 2002, the country’s medical service law was revised to prohibit doctors from seeing patients via video, restricting their use of telemedicine technologies to information sharing and video conferencing among themselves.

When authorities began allowing telemedicine in 2009 for the underprivileged and elderly in the countryside, critics clamored that the system would only benefit well-known hospitals, because people opting for services would only ask for care from names they recognized.

Opponents also demanded to know who would be responsible for medical lapses: the doctor or the producer of the telecommunications device.

Meanwhile, the Health Ministry outlined who will be eligible for the telemedicine services - namely patients who require constant long-term care after being diagnosed with chronic diseases or health conditions such as high blood pressure, or people serving in the military.

After receiving positive feedback, the government announced in February its plans to expand the pilot project, reaching out to even more recipients around the country later this year.

Telemedicine proves especially effective for those with chronic illnesses because the services allow for consistent treatment, said Ahn Mu-eob, a professor at Hallym University Medical Center in Chuncheon, Gangwon.

But in explaining the prospective beneficiaries of the tech-savvy system, Ahn and Choi Jae-wook, head of the Research Institute for Healthcare Policy Korean Medical Association, stated that not all patients would be eligible to use the program.

“It’s impossible to remotely treat someone with a skin problem or a psychological disorder,” said Choi.