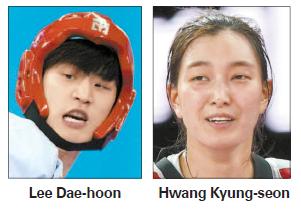 The World Taekwondo Federation (WTF) on Sunday that announced that Muju was chosen over Samsun, Turkey, to host the biennial global taekwondo competition. This will be the seventh time Korea has held the event, which began in 1973.

Korea, the origin of the Olympic sport, last hosted the event in Gyeongju, North Gyeongsang, in 2011.

For this year’s competition, Korea has sent a total of 16 taekwondo players in eight different weight categories. The team arrived in Russia last week to adjust to the local environment.

Lee is Korea’s ace player. The 23-year-old, who will be competing in the bantamweight (under 63 kilograms) category, is eyeing his third straight victory in the Worlds. The two-time Asian Games winner was also voted the 2014 WTF Male Player of the Year, and took the top place at the Asian Championships.

Although he has won past events, Lee is under pressure since this year’s Worlds are the de facto test events for the upcoming Summer Olympics in Rio De Janeiro.

In order to achieve a career grand slam, Lee needs a gold medal in the Olympics - which he failed to win in London three years ago. In 2012, Lee took home silver after losing to Spain’s Joel Gonzalez Bonilla.

Unlike the Worlds, in the Olympics there are only four weight classes. Lee had to compete as a flyweight (under 58 kilograms), which meant he was fighting 5 kilograms under his usual weight.

Hwang, on the other hand, is coming into the Worlds as a veteran preparing for her third Olympic gold. After winning bronze in the 2004, she went to the top of the podium in the last two Summer Olympics.

“Although Hwang’s speed isn’t the same as when she was in her prime, her experience will make her absolutely lethal,” said Lee Sang-heon, a sports division director for the Korea Taekwondo Association.

Hwang, who turns 29 next Thursday, will be competing in the under-67 kilograms category. She already has two Worlds titles under her belt, but will be going for a third, hoping to earn an Olympic slot.

Taekwondo players ranked No. 1 to No. 6 will automatically earn a spot in the Olympics. Hwang is currently ranked No. 11, and she hopes the points she’ll earn at the Worlds will help her break the top six by December when the points are accumulated.

Whichever player wins the Worlds is allocated 120 ranking points by the WTF, second only to the Olympics, which gives 200 points.

“Dae-hoon and Kyung-seon will get the results they’re after because they trained hard,” said national team trainer Park Jong-man.