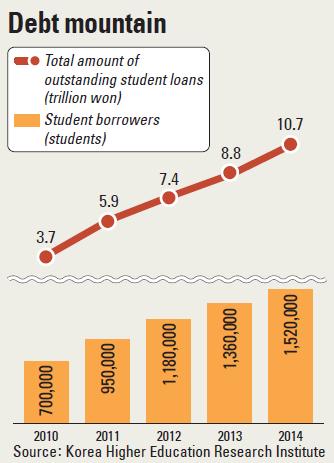 The number of Korean students struggling to pay back student loans surged nearly 117 percent between 2010 and 2014, said a report by the Korea Institute of Finance (KIF) on Monday.

Defaults are rising too.

The report is particularly bad news considering that many young, college-educated Koreans are having difficulty finding good jobs or any jobs at all during a longer-than-expected economic slowdown.

The outstanding balance of student loans stood at 10.7 trillion won ($9.78 billion) as of last year, up from 8.8 trillion won in 2013, while the number of student debtors hit 1.52 million, up from 1.36 million a year earlier, according to data compiled by Korea Higher Education Research Institute. From 2010, when the government-run student loan program was launched, the number of loans issued jumped 117 percent.

As of late 2013, there were 41,000 college students who defaulted on loan payments for more than six months, up from 26,000 in 2010. The total number of defaulting students came to 44,620 as of December, accounting for about 17 percent of total borrowers with college diplomas, including those who took normal bank loans.

“Korea’s student loan policy is too generous,” said Kang Jong-man, report author and a KIF researcher. “Although the loan system was introduced five years ago, loan issuances spiked and the number of those with dangerous credit problems is rapidly becoming a social problem.”

Last year, the government extended the grace periods for indebted students as part of efforts to reduce the number of defaults by young people.

The Korea Student Aid Foundation was established in 2009 to allow college students to borrow a certain portion of tuitions and allowances, enhancing the government’s role in management of the student loan policy. In advance, the government guaranteed borrowings by students from financial institutions.

There are two types of student loans. One type can be borrowed by any family no matter how wealthy. A second adopted in 2010 offers loans to students from low-income households.

The report points out the repayment rate by low-income household students is noticeably low. As of December, 1.81 million students from poor families, or 68.3 percent of those who borrowed for their college tuitions from the state-run institution, are paying back their debt. The percentage of students paying back the loans four years after graduation stood at 60.4 percent.