Luna is unveiled on ‘Masked Singer’

Luna is unveiled on ‘Masked Singer’ 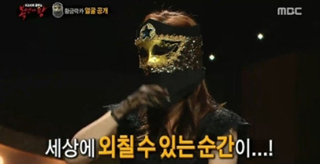 The identity of the mysterious female singer performing under the alias Golden Lacquer Used Two Brackets on MBC’s “King of the Masked Singer” was revealed on Sunday to be Luna from girl group f(x). The program is a singing survival competition in which the faces of the participating singers are hidden from public view while performing. This makes it only possible for the judges to evaluate them based on their vocal abilities.

Luna, who sang “Sad Fate” by Nami, unmasked herself on Sunday after losing to a yet-to-be-identified singer performing under the alias Jingle Jingle Lark.

The judging panel was stunned to find out that Luna, 21, was behind those performances.

“I thought I would be able to feel free if I could hide my identity when singing on stage, but I didn’t know that it would be this difficult to express my emotion using only my voice,” she said during the show.

“I truly learned a lot and I’m really happy about it.”

Luna’s identity in the program was revealed six weeks after the show began. While taking part in the program, she has won the King of the Masked Singer title twice. Before Sunday, her identity had aroused the curiosity of many Internet users, who wanted to know the identity of the singer with the soulful voice. Luna sang a variety of songs, including “Don’t Think You’re Alone” by Kim Bo-kyung.