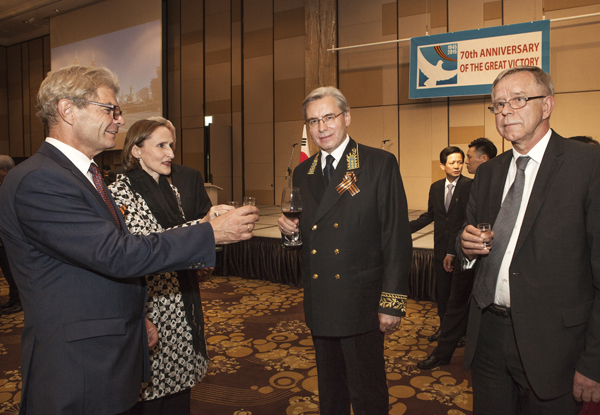 Russian Ambassador to Seoul Alexander Timonin, center, talks with guests at a dinner reception on Friday to mark the 70th anniversary of Victory Day at the Millennium Seoul Hilton in Jung District, central Seoul. By Park Sang-moon

At a dinner reception Friday commemorating the 70th anniversary of Victory Day, Russian Ambassador to Seoul Alexander Timonin declared he is “worried” that the leaders of some countries are attempting to whitewash the atrocities committed by Nazi Germany and its allies during World War II.

During a speech delivered to some hundreds of guests from diplomatic and military circles at the Millennium Seoul Hilton in Jung District, central Seoul, Russia’s top envoy said, “The attempts to rewrite the history of the Great Patriotic War and World War II, to justify military crimes committed by the Nazis and their allies, and to divide the world again into zones of influence have become more and more insistent.”

“Russia paid a very high price for the victory in the Great Patriotic War and will never allow the same tragedy to happen again.”

Timonin did not specify the leaders to which he was referring.

During his address, the Russian diplomat, who arrived in Seoul in January, spent most of his time highlighting the immense efforts his people devoted in the battle against fascist Germany.

“Almost 27 million of our compatriots were killed during the 1,418 days of the Great Patriotic War. They had only one choice - either to defeat the enemy or to become slaves. In almost every Russian family, someone was killed, wounded or lost, was burned in the incinerators of concentration camps,” he said.

Also mentioned that day was the Soviet Union’s war against Japan in the 1945 Manchurian Strategic Offensive Operation, which Timonin stated proved to be a decisive factor in the Japanese surrender and the end of World War II.

The loss of 4,000 Soviet soldiers over the 25-day operation was what “allowed the liberation of Northeast China and the Korean Peninsula,” he emphasized.

“This is the perfect day to look back on … [Korea’s] independence [from Japanese colonial rule] to the destruction of [the 1950-53 Korean War] to the hardships of economic development and finally to [the country we have grown into today],” he said.

This year marks the 25th anniversary of the establishment of diplomatic ties between Russia and Korea.