Car exports hit by slumps in Russia and Middle East

Car exports hit by slumps in Russia and Middle East 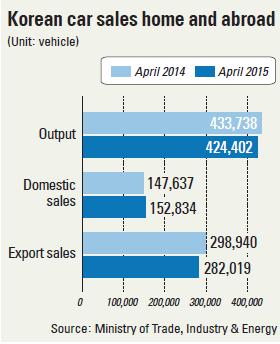 With a slumping global economy, car production and exports from Korea declined in April while sales in the domestic market increased thanks to the popularity of midsize sedans and SUVs, data provided by the Ministry of Trade, Industry & Energy showed Monday.

The Trade Ministry said the Korea’s car export in April dropped by six percent from a year earlier to 282,019 units, adding that slumping economies in newly industrialized nations including Russia, Brazil and China, as well as decreasing demand in the Middle East caused by falling international oil prices, were the main reasons. The weak yen was another.

Korea’s car exports have been consistently decreasing for the past four months. In total, Korea exported 1,015,779 units through April, down 6.6 percent from a year earlier.

One piece of good news was that the car exports by Korean companies increased slightly from March, from 275,999 units to 282,019 units, or by 2.2 percent.

The nation’s two auto giants, Hyundai Motor and Kia Motors, were able to sell more popular models such as the Genesis and K5 sedans, but exports by the two companies dropped by 4.8 and 9.9 percent, respectively, due to poor economies in newly industrialized nations and the strong won. Ssangyong Motor had the toughest time last month as its exports dropped 15.1 percent from a year ago to only 4,401 units, mainly due to the economic tailspin in Russia, the biggest export market for the company.

In the Korean market, sales rose 3.4 percent from a year ago to 152,834 units: 132,003 by Korean automakers and 20,831 by foreign brands. The sales were led by midsize sedans such as Hyundai Motor’s Sonata and Renault Samsung’s SM5, and SUVs including Kia Motors’ Sorento, Hyundai Motor’s Tucson and Ssangyong Motor’s Tivoli.

Ssangyong Motor’s sales in Korea for the first four months of the year increased by 28.2 percent from a year ago, thanks to its new Tivoli SUV. The nation’s smallest automaker sold a total of 29,237 cars during the past four months.

Foreign brands continued to ride high in Korea with sales increasing by 14.7 percent from a year ago to 20,831 units in April. The imported car market was again dominated by German automakers including BMW, Mercedes-Benz, Audi and Volkswagen, who had a combined market share of 57.1 percent. Benz sold 4,136 units in April, followed by BMW (3,798) and Volkswagen (2,612).