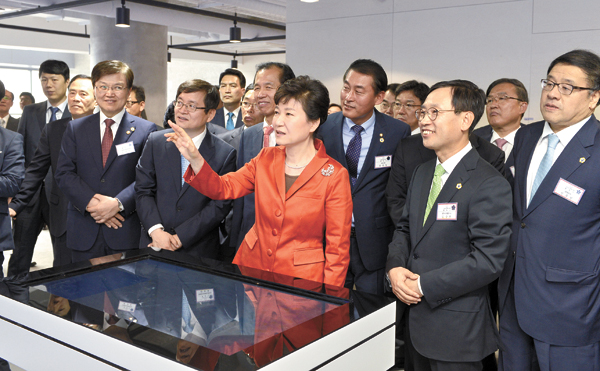 According to the Ministry of Science, ICT and Future Planning on Monday, Naver opened the nation’s 10th creative economy innovation center in Chuncheon on Monday along with a start-up fund worth 105 billion won ($96.2 million) dedicated to foster start-ups specializing in big data.

The center occupies two buildings on the Kangwon National University campus in Chuncheon with about 1,270 square meters (13,670 square feet) of space. Start-ups can move in and work with the university’s entrepreneurship support center.

“Big data, which is often called the 21st century’s crude oil, is the new capital in a creative economy,” Park said during a speech at the ceremony. “It creates value-added jobs and profits from creativity and ideas, even when there are no tangible resources available.”

Gangwon was selected because nearly 82 percent of the province is mountains and highlands, making it difficult to foster manufacturing industries.

The Gangwon center will launch an integrated big data portal, a search engine where anyone can find data collected by the central and local governments as well as universities and research institutes. Naver signed a memorandum of understanding with some 50 data-related organizations and companies nationwide. The portal will also operate a big data market, where data analysis skills and commercial data are traded on payment basis.

In cooperation with local and global IT companies like Naver, SK Telecom, Google and IBM, the Gangwon center will also work on developing embedded software and data-based solutions for other industry-based creative innovation centers like the ones in North and South Gyeongsang and in Gwangju.

According to the ICT Ministry, big data is a quickly growing market as global IT companies like Google, Facebook, Amazon and Apple are expanding businesses by analyzing user data they collect.

The global market was estimated to be worth $6.8 billion in 2012 and is expected to grow to $31.1 billion by 2017, while nearly 66 percent of the market is expected to consist of software development and data-based services.

The domestic market for big data is relatively small, estimated to grow to $420 million by 2017.

Mobile telecommunication operators like SK Telecom and KT are looking to big data to make use of their servers, storage and networks, factors that are crucial in providing quick transmission of massive amounts of data. Internet portal websites like Naver are just starting data analysis services.