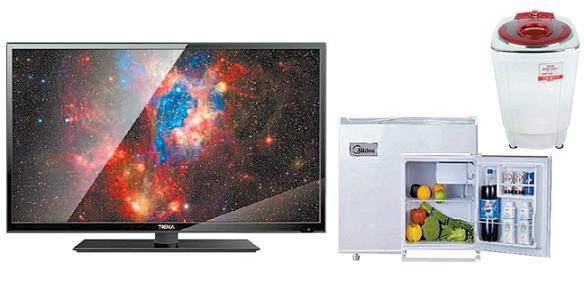 Clockwise from left: a television manufactured by Tiena, a refrigerator by Midea and a laundry machine by Shinil. Provided by Auction

Home appliances made by small and medium-sized enterprises (SME) are selling robustly as consumers look for cheaper options amid the sluggish economy, a study by a leading online marketplace operator showed on Monday.

Sales of LED televisions were up 25 percent year-on-year, as SME brands like Smatra offered similar features as big name brands at prices 20 to 30 percent cheaper.

Smatra’s 32-inch LED television, for instance, uses the same type of panels used by LG Electronics and Samsung Electronics in their televisions. Its 32-inch LED models have a long lifespan and offer high-definition quality, according to Auction.

The model, priced 215,000 won ($197), can also be connected to smartphones through MHL cables, so that users can play computer games or surf the web on their TVs.

Sales of other home electronics like refrigerators and laundry machines also grew.

Small home appliances for one-person households - such as a mini laundry machine weighing only 3 to 5.6 kilograms (6.6 to 12 pounds) and costing less than 100,000 won - were popular as well, Auction said.

A leading SME television brand Tiva, which according to Auction has sold the most televisions online among SMEs in recent years, recently changed its name to Tiena to upgrade its brand image. Auction is planning a Tiena brand event where a limited number of UHD (ultra-high definition) and LED televisions will be sold.