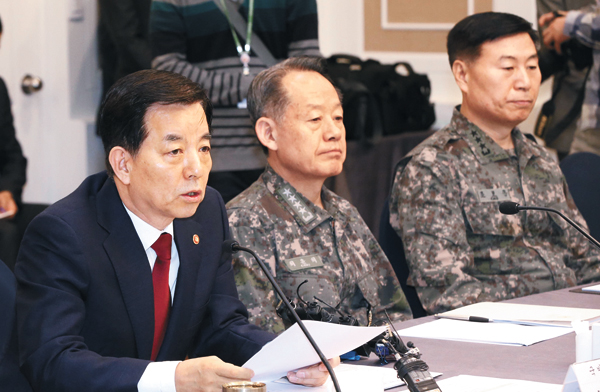 Jolted by North Korea’s firing of a ballistic missile from a submarine, politicians in the South demanded that the military completely rewrite its defense strategy.

But the minister of defense said Monday the country is fairly capable of countering existing threats from the North and is also improving that ability.

The ruling Saenuri Party called an urgent meeting with top military officials including Minister of National Defense Han Min-koo and Adm. Choi Yoon-hee, chairman of the Joint Chiefs of Staff, on Monday morning to address the North’s test-firing of a submarine-launched ballistic missile (SLBM). The North’s state-run media reported Saturday that the launch from the submarine took place successfully on Friday with North Korean leader Kim Jong-un observing firsthand.

A submarine capable of launching a ballistic missile is a security nightmare for not only Seoul but also Washington and Tokyo, although military experts said the North’s program is at an early stage and operational deployment is still years away.

At the emergency consultation between the ruling party and the Ministry of National Defense, Floor Leader Rep. Yoo Seong-min said the North’s SLBM test requires the South to rethink its missile defense system.

“I believe the current strategy needs to be rewritten,” Yoo said.

“If the North’s claim of a successful test-firing of the SLBM is true, many experts said our plans are unable to deter it,” Yoo said. “While we continue our diplomatic countermeasures, the Defense Ministry must create a new strategy on how to militarily counter this situation.”

In order to counter the North’s growing missile capabilities, the South Korean government has said it will build its own missile defense system known as the Korea Air and Missile Defense by using a terminal-phase, low-altitude, hit-and-kill approach. The South also plans to establish the “Kill Chain,” an integrated information, surveillance and pre-emptive strike system to eliminate North Korean missiles before they are launched.

Yoo urged the Defense Ministry on Monday to address the development in upcoming security consultations with the United States.

“The Korea-U.S. military alliance must prove its worth,” he said.

“Including the combined assets of the South and the United States, we have capabilities to counter the North to a certain extent,” Han said. “And we are also developing plans to counter future threats more effectively.

“Retaliation against an enemy provocation is an order from the people,” Han said. “The military will ruthlessly retaliate to completely destroy the chain of provocations.”

The party also asked the ministry to provide more information to the public in order to ease the people’s worries about the new development.

Calling a missile fired from a submarine a “most fearful weapon,” Saenuri Chairman Kim Moo-sung asked the National Defense Committee to hold a meeting to discuss the issue.

Minister Han told lawmakers on the National Defense Committee that the military was following the North’s test in real time. But he did not elaborate on how it did that.

The minister and senior military officials also met with the leaders of the opposition New Politics Alliance for Democracy (NPAD) later in the afternoon and briefed them. “Thorough preparation against the North’s new military threat is crucial,” NPAD Chairman Moon Jae-in was quoted as saying by party spokesman Kim Seong-su. “But unnecessarily stirring up the people is never desirable, so the ministry should inform the people more accurately about the seriousness of the North’s threat and the South’s ability to counter it.”

According to the NPAD spokesman, the ministry said the missile fired from the submarine was a dummy modeled after a Russian SLBM. North Korea has never succeeded in the re-entry of a missile into the atmosphere, the ministry was quoted as saying.

The North only has one Sinpo-class submarine capable of carrying a ballistic missile, the ministry told the opposition leaders.

The North Korean Navy is known to operate a considerable submarine fleet including about 40 shark-class vessels and about 20 Romeo-class submarines. The South also said that the North also operates about 10 golf-class submarines that were models for the new Sinpo-class submarine, which the North used last week for the SLBM launch from underwater.

The Ministry of National Defense also briefed reporters about the situation at a regular press session, stressing that Pyongyang must immediately stop its SLBM development program.

“The North’s SLBM development is in its early stage,” Kim Min-seok, spokesman of the ministry, said. “Based on histories of advanced countries, it takes four to five years to actually develop an SLBM program after an underwater test-firing.

“For the North, the submarine used for the test was not even completed,” he said. “It will take a much longer time for the North to complete the SLBM and install them on submarines. The North must stop the program right now.”

He also said the South has enough capability to track down all North Korean submarines and take them out with missiles.

A senior South Korean military official said Monday that the North will be able to operationally deploy its newly developed, SLBM-capable submarines within two to three years. Pyongyang built the Sinpo-class, 2,000-ton submarine, which test-fired the ballistic missile last week, at the end of last year.

Another government official said the South Korean military will update its countermeasures for the North’s threat before the SLBM will be operationally deployed.

“We will make the full use out of the surveillance assets of Korea and the United States including satellites and unmanned reconnaissance planes to track the movements of the North’s submarines,” he said. “If there is any sign of a provocation, we already have enough surface-to-surface and ground-to-air capabilities to preemptively take out targets.”

He also said the South may consider a plan to purchase more Green Pine radar systems if necessary. The Israeli-built ground-based missile-defense radar system has a 600-kilometer range, and the South currently operates two systems.

The North does not have nuclear-powered submarines capable of crossing the Pacific Ocean undetected to reach the United States. Nonetheless, its aged diesel-powered underwater vessels capable of launching ballistic missiles, in addition to its nuclear arms programs, are a game changer for Northeast Asia.

Joel Wit, a visiting fellow with the U.S.-Korea Institute at Johns Hopkins School of Advanced International Studies, was skeptical that Pyongyang actually has a submarine capable of launching a ballistic missile. If it does, it only has one, he said.

While the SLBM program of the North is not an imminent threat to the United States, last week’s test is a clear threat to the Northeast Asian region, he told the JoongAng Ilbo. If the North manages to operationally deploy the system, Guam will be within range, he added.

The North’s test-firing of the SLBM also threw cold water on the Park administration’s hope to thaw frozen inter-Korean ties in the coming months.