After 23 miles 385 yards and 22 years, race of redemption endures

After 23 miles 385 yards and 22 years, race of redemption endures 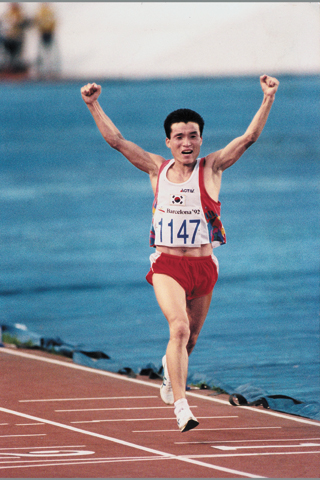 The performance by Hwang Young-jo, remembered as the “Hero of Montjuic,” in one of the signature events of the Olympic Games held a meaning far greater than the gold medal he brought home.

The 168-centimeter (5-foot-6) marathoner erased a national sadness that had endured for 56 years since Sohn Kee-chung won the 1936 Olympics in Berlin with the Imperial Japanese flag on his singlet because Korea was under colonial rule.

Hwang was technically the first South Korean to win the Olympic marathon, but what really matters is he won the race with the Taegeukgi on his chest and a Japanese runner chasing him.

Hwang Young-jo runs at a Seoul park in 2012.[JoongAng Ilbo]

“I could not fully understand [Sohn’s] situation until the moment I was watching the Korean national flag in the Olympic Stadium as a gold medalist,” said Hwang on his website (www.youngjo.net). “He must have been so thrilled, but tinged with sadness at the same time.”

Hwang was born on May 22, 1970, in the coastal town of Samcheok, Gangwon, the fourth child and first son. His mother, Lee Man-ja, was a haenyo (female diver) and even went into the East Sea when she was pregnant.

Hwang was an energetic child, helping his parents in the field, while often playing in the sea. He recalls running about 10 kilometers (6.2 miles) a day between school and his home. Hwang was among the most athletic kids in his age group. When he entered Geundeok Middle School, all the coaches wanted him to join their clubs, but Hwang chose cycling.

Hwang started running competitively at Myeongryun High School in Gangneung, starting at 1,500 meters. In 1989, at the 70th National Sports Festival, he won at both 5,000 meters and 10,000 meters. After graduating from high school, he joined the Kolon athletic team.

His relationship with the marathon started in 1991. By then, he was known as a top distance runner, winning the 10,000-meter race at the Asian Championships in 1990. Hwang was asked to run about 20 kilometers as a pacesetter for his teammates in the Donga Marathon.

Before the event, Hwang had never run farther than 30 kilometers, much less a 42.195-kilometer marathon. But he kept going and finished in third at 2 hours 12 minutes and 35 seconds, just 61 seconds off the Korean record.

In 1991, Hwang won the gold medal at the Summer Universiade in Sheffield, United Kingdom, and in February 1992 became Korea’s first sub-2:10 marathoner with a time of 2:08:47 at the Beppu-Oita Marathon in Japan.

After setting a new Korean record, Hwang turned his attention to the Olympics. While he was confident, few in Korea thought he could bring home the gold.

The marathon is traditionally the final Olympic event, so Hwang had to watch other athletes compete as he waited for the last day. Just before the start of the race, Hwang saw medalists gather for an end-of-the-Games photo.

But Hwang surprised everyone, and his victory was sweet. The Korea University graduate was neck-and-neck with Koichi Morishita through 40 kilometers, but going over the Montjuic hill produced a finishing kick to edge his challenger at the finish line.

“I often dream of the day of Montjuic,” said Hwang. “It was not only the climax of my career but also the realization of a dream for my senior marathoners and Koreans all over the world.”

The victory in the 1992 Olympics made Hwang a national hero. In April 1994, Hwang set another Korean record with 2:08:09 at the Boston Marathon, and in October he won a gold medal at the Asian Games in Hiroshima, Japan, where the finish line of the marathon was at Peace Memorial Park, which honors the victims of the atomic bomb. Hwang later recalled that the memorial for Japanese victims was at the center of the park and the Korean victims was outside, saying that encouraged him to run his best.

Hwang announced his retirement at age 26 before the 1996 Summer Olympics in Atlanta, which surprised everyone. He had been worn down by injuries, a lack of motivation and a controversy surrounding the selection of the national team.

Hwang went on to work as a broadcast commentator, marathon coach, college professor, sports administrator and head of a charity group. In 1999, to commemorate his achievement, the city of Samcheok even opened a memorial hall dedicated to him.

Some people criticized Hwang for his celebrity status after retiring from competition, but the Olympic gold medalist continues to play an important role in the local marathon community, working with talented young runners and promoting the sport.

“It is important for me as a great marathoner to educate other gifted athletes,” he said. “I think it is my role to give back the support I received.”