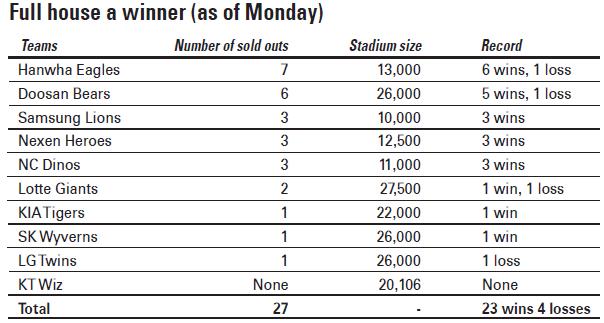 Teams in the Korean Baseball Organization (KBO) League are getting a big boost this season from sell-out crowds at home.

On Sunday, the Doosan Bears blanked the Hanwha Eagles 6-0, while the NC Dinos whupped the Lotte Giants 6-2. Both games took place at the victors’ home stadiums with no seats to spare.

Sunday’s game is no anomaly. KBO data shows that teams mark exceptionally high winning percentages when they play at home in front of sell-out crowds.

As of Monday, about a quarter of the way through the season, 27 games had sold out, and the home teams won 23 of them - a 85.2 winning percentage.

This exceeds the general home winning percentage of KBO clubs this season, at 55 percent. Such dominance of home teams playing for sell-out crowds this season was already signaled from the league opener on March 28. Four stadiums recorded sell-out crowds, and at each, the home team notched a victory.

So far, the Hanwha Eagles have had seven sold-out games at home, the most among KBO clubs, and have defeated visitors six times. Their only loss was against the Giants on May 3.

The Samsung Lions and Nexen Heroes took all of three of their sell-out games.

The NC Dinos, which currently have the highest winning percentage in May with eight victories and one loss, won three sell-out games just last week.

The Kia Tigers and the SK Wyverns each won one sell-out game.

The only teams to break the trend are the Giants and the LG Twins. The Giants have had split results in two sell-out games, and the Twins have lost their only sold-out game. The KBO rookie club KT Wiz has yet to sell out a stadium.

Eagles manager Kim Sung-keun contributed the club’s above-average performance this season to fans’ enthusiastic cheering. The Daejeon-based club was the league’s worst team for the last three seasons, but they are staying afloat at sixth in the league.

“When I see supporters from the dugout, I get the feeling that they want us to show them something,” he said.
“So when we lose, I feel really sorry for them.”

Players also often say that the cheering from thousands of fans makes them more enthusiastic and energetic in games.

The sellout effect is expected to help bring more fans to their local stadiums.

As of Monday, the total audience this season decreased 2 percent compared to last season. The average audience per game fell from 11,139 to 10,891, but as fans are noticing that filling empty seats in the stadium can make their team play better, KBO clubs are expecting more sold-out games in the future.