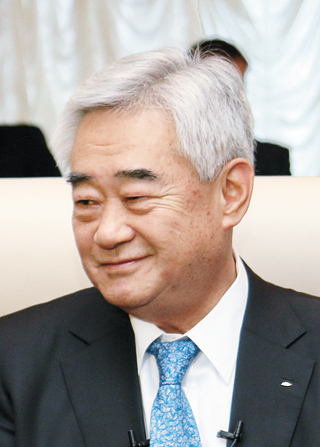 Muju, which is located about 240 kilometers (149 miles) south of Seoul, was selected as the host of the 2017 World Taekwondo Championships on Sunday at the WTF’s executive council meeting in Chelyabinsk, Russia.

Korea was considered an unlikely choice for the next host of the Worlds because it already held the event six times, but according to Choue, the recently constructed Taekwondowon served as a decisive factor in winning the bid.

“I am very pleased that the Worlds will take place in Muju at such a good time,” Choue said to Ilgan Sports, an affiliate of Korea JoongAng Daily, after the WTF meeting in Russia on Monday. The 67-year-old chief emphasized that the event offered an opportunity for Muju to promote Taekwondowon to the global taekwondo community.

“Taekwondo is one of Korea’s gifts to the world,” he said. “The government created a great facility after putting up big money, but Taekwondowon is still almost unknown to the world.”

Right now, however, Choue is focused on successfully hosting this year’s Worlds, which started in Russia on Tuesday.

This year’s tournament will feature a performance by the demonstration team of the North Korea-led International Taekwondo Federation. It is the first time that the team has been invited to perform at the Worlds.

“We want to show that the root of taekwondo is the same and want to cooperate to make taekwondo a beloved sport in the world,” he said.