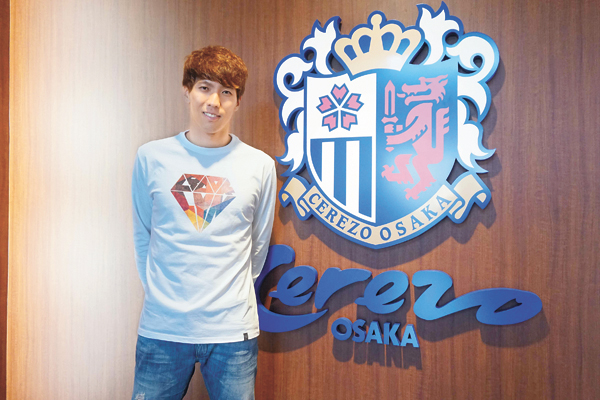 Cerezo Osaka and Korea national team goalkeeper Kim Jin-hyeon stands in front of his team’s emblem at the clubhouse in Osaka, Japan, on May 4.[Joint Press Corps]

Kim Jin-hyeon was long ranked the No. 3 goalkeeper on the national football team, but after the Asian Cup in January, Kim claimed the No. 1 spot.

The 192-centimeter (6-foot-4) goalkeeper played a pivotal role in Korea’s second-place finish behind host Australia with his quick reflexes. Some fans even called him “Inspector Gadget” because his arms stretched like the character when making saves.

But after the Asian Cup, fans wondered what would be next for Kim. His Japanese club, Cerezo Osaka, was relegated to the second division after finishing 17th among 18 clubs in the J-League, and there was talk that he might seek a transfer.

While he has been offered spots on first division clubs, Kim - who made his professional debut with Osaka in 2009 - decided to stay with the club even before his Asian Cup success.

“Goalkeepers are a team’s last line of defense, which demands a lot of responsibility,” Kim said in an interview with Korean reporters at Cerezo Osaka’s clubhouse on May 4. “My team and supporters have helped me get this far.”

The 27-year-old said he doesn’t regret his decision to stay with the club because he doesn’t want to “run away” from the difficult situation.

“As a man, I thought that I can’t just pick up and run because the situation isn’t ideal,” he said. “If I turn my back at this moment, I won’t stand a chance in the difficult situations I’ll face after retirement.”

Some fans now compare Kim with Juventus’ legendary goalkeeper Gianluigi Buffon who stayed with the Italian club despite the team’s demotion. The 37-year-old veteran goalkeeper helped Juventus get back to first division Serie A just a year after the team’s demotion to Serie B in the 2006-7 season.

Kim was with Cerezo Osaka when the team was promoted to the first division in 2009, and he hopes to be there when it happens for a second time.

“We are still in the early phase of the season,” he said. “Of course, our goal is to be back in the first division.”

Under Korea national team coach Uli Stielike, Kim said he felt more responsibility as the team’s first-ranked goalkeeper. The Dongkuk University graduate, who made his national team debut in 2012, has now played 11 matches for Korea, allowing only eight goals.

“After the semi-finals in the Asian Cup, Stielike told me, ‘You made a clean sheet for five consecutive matches, which no other Korean goalkeeper achieved, so play with confidence,’” he said.

Kim continues to play well despite nagging injuries. He has almost no cartilage in his left knee, the damaged tissue surgically removed after an injury in 2010. He experiences pain whenever he jumps and lands on the ground. But the goalkeeper is adamant that his injuries will not affect his performance.

“I don’t want to hear that ‘I made a mistake because of injury or because I play in the second division,’” he said. “There is no problem with me playing the game.”

Kim said he is a “man who doesn’t get satisfied,” so he will always try to play for the national team until he retires.

When asked about his expectation for the 2018 World Cup in Russia, Kim expressed his hope for playing in his first World Cup, saying, “You never know what will happen in people’s lives.

“I think my football career has just passed the one-third mark. The Asian Cup was a turning point of my life and my second life as footballer has just started.”