From left, Hwang Kyu-baik’s mezzotint prints “White Handkerchief on the Grass”(1973), “The Tortoise and Hare”(1983) and “Three Moons”(1993) shows how the artist’s oeuvre has evolved through time. They are part of his retrospective titled “Seen and Unseen” going on in the National Museum of Modern and Contemporary Art(MMCA)’s Gwacheon branch, south of Seoul. provided by the museum.

Those who see artist Hwang Kyu-baik’s works, currently on display at the National Museum of Modern and Contemporary Art’s Gwacheon headquarters, could think they were oil or pastel paintings. They have diverse colors, charmingly soft hues and delicate tones, so the everyday objects depicted in them have a dreamy and poetic ambience.

But, surprisingly, most of the works were created by printmaking.
Art that is created using this technique tends to be thought of as lacking subtle changes in its tones. But mezzotint, a kind of Western printmaking method that features intaglio on copperplates, can produce exquisite gradations of light and shade. It requires the hard labor of roughing and smoothing the copperplates with small tools.

As a result, there are not so many artists nowadays who focus on mezzotint, which was actively used in Europe in the 18th and 19th centuries to reproduce portraits and other oil paintings. And there are few Korean artists embracing mezzotint.

Hwang, 83, is a unique local artist who mastered various European intaglio printmaking techniques in Paris in the late 1960s and then developed his own style of mezzotint printmaking in New York in the 1970s. He then devoted more than three decades using the craft to depict everyday objects, sometimes in surrealist juxtapositions that would remind viewers of Belgian artist Rene Magritte, and familiar landscapes from unfamiliar, poetic angles. 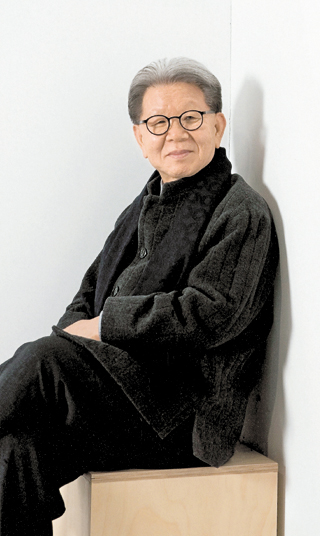 “Whereas traditional mezzotints have black backgrounds, most of my works have grey backgrounds of delicate gradations,” Hwang told the press on April 30 at the MMCA Gwacheon, where his large-scale retrospective is running until July 5.

The museum wrote on its website that the gray background “translates the empty space within the picture plane into a visual vocabulary.”

“In fact, mezzotint is not so difficult as you think, but young artists won’t try, as it requires much labor and it is difficult to select the subjects suitable for it,” the artist said. “I chose everyday objects like watches, umbrellas and bowls. When I engraved them, let’s say a bowl, elaborately on plates for printing, I felt like falling into a trance and becoming a creator of a bowl — not the ordinary bowl but a whole new bowl. That’s the charm and life of mezzotint.”

The exhibition is divided into three parts. The first shows Hwang’s early prints made in Paris. In the second are his mezzotints produced in New York from the 1970s to the 1990s. They include “The Tortoise and the Hare,” a symbolic mezzotint he was commissioned to create as one of the posters for the 1984 Winter Olympics in Sarajevo.

“The details of tenderness and delicateness facilitated by the use of the medium of mezzotint give birth to a world of poetic connotations and fantasies within,” the museum wrote on its website about the works.

The last part consists of Hwang’s paintings created since his return to Korea in 2000. He is now focusing on oil paintings, as his age no longer allows the hard and elaborate labor for mezzotint.