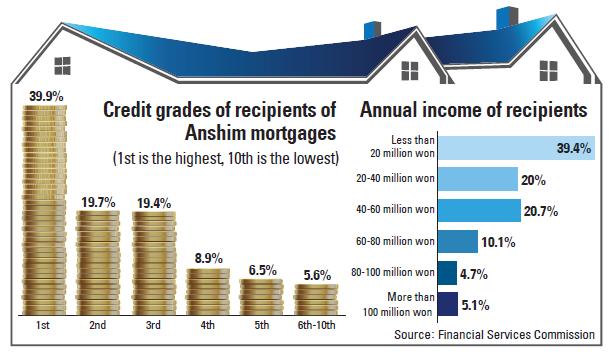 More than half of the people who signed up for government-backed fixed-rate mortgages had good credit scores and many were in high income brackets, sparking criticism that the new program designed to help underprivileged households crushed by debt benefitted the affluent instead.

According to a report from the Financial Services Commission (FSC), about 59 percent of the 327,000 recipients of the Anshim Jeonhwan Daechul mortgage program were ranked in the top two tiers of the 10-grade credit rating system.

People between the sixth and 10th tier, considered a poor credit risk, only accounted for 5.6 percent of the participants.

More than 30 percent of the recipients earn more than 40 million won annually, the report showed, including a 5.1 percentile whose annual income surpassed 100 million won.

The government-backed Anshim Jeonhwan Daechul program, which literally means converting to a safer loan, was launched in the aftermath of the central bank lowering the key policy rate to a historic low of 1.75 percent in March. It was aimed at helping households switch to cheaper loans at a fixed-rate between 2.55 and 2.6 percent for up to 30 years.

Despite its high popularity, the program drew criticism from mortgage payers in the country for its strict requirements. The program accepted only those who got loans from local commercial banks, not savings banks, which in Korea are more like consumer finance companies catering to low-income, bad-credit borrowers.

Dismissing criticism, authorities refused to extend the program to convert loans from savings banks or other financial institutions.

“One of the cases was a 41-year-old man who converted his mortgage of 300 million won to the fixed-rate loan in order to purchase a 625 million won house,” Rep. Shin Hak-yong of the New Politics Alliance for Democracy said in his analysis of the report. “His annual salary was 540 million won.

“This proves how the program, which was initially designed for low-income people, benefitted many upper-class people,” he added.

There were also 511 borrowers who purchased residences worth more than 600 million won.

“The FSC said the purpose of the program was to ease household debts of underprivileged people, but it turns out that they helped high-income people, or owners of expensive houses,” Shin said.

Refuting Shin’s response, the FSC claimed in its report Monday that the program helped many low-income people.