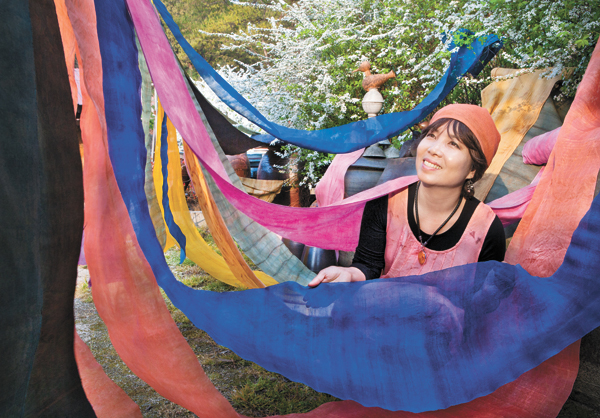 Nam Hye-in, a natural dye specialist, smiles while surrounded by various tinted fabrics in the front yard of her workshop in Buraemi Village in Icheon, Gyeonggi.BY PARK SANG-MOON

“I define natural dyeing as representing a person’s mind,” said Nam Hye-in, a specialist in the traditional art, while scattering blossoms in the spring wind at her countryside workshop, Pieerang.

“Even the same indigo dyes convey different feelings depending on the person who dyed the fabrics. Some feel warm while others never catch my eye. It seems that colors appear in various ways,” she explained.

The workshop is located in Buraemi Village in Icheon, Gyeonggi.

Every year, about 3,000 people visit her space.

Nam, who settled in Buraemi Village in 1994 with her husband, a traditional potter, was born in Cheongsong, North Gyeongsang.

The artisan learned the art of natural dye from her mother, who made clothes for her children, staining the fabrics herself. She taught Nam to rinse and dry the fabrics, which eventually led her daughter to study natural dyeing.

In 1997, Nam began practicing the craft in earnest. Since then, she has been invited to many lectures and has been commissioned to dye clothes. She became even busier after the area her workshop is based in became a designated a so-called Green Rural Tourism Village in 2003.

As spring comes, the dyeing process begins with the struggle to find wild flowers after the cold winter to use to transform the fabrics.

During summer, indigo farms must be protected against weeds and UV rays, while acorns should be collected in autumn. 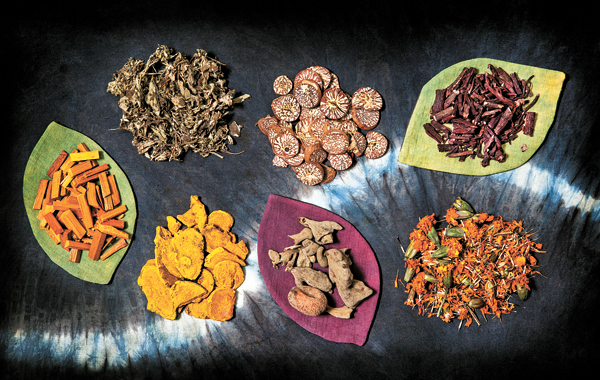 Some of the different ingredients used for natural dyeing. BY PARK SANG-MOON

When Nam collects acorns and chestnuts, the main ingredients used for dyeing, she has to keep squirrels in mind since they feed on those resources.

Natural dye has its own allure compared with synthetic dyeing, according to Nam, in that it has different outcomes depending on a person’s mind and spirit.

Nam says she never lets her students dye when they are in a bad mood. When stressed or feeling negative, a person can quickly mess things up.

Traditional beliefs dictate that the dye specialists have their own colors. Each of them makes a unique tint of their own depending on their image or atmosphere. The color that appears on the fabric apparently represents the person’s nature.

The idea is that, supposing that 10 people use the same dye, the colors presented on the final results will all spark different feelings.

Nam added that her spiritual hue is warm kkokduseoni, which is a reddish color. 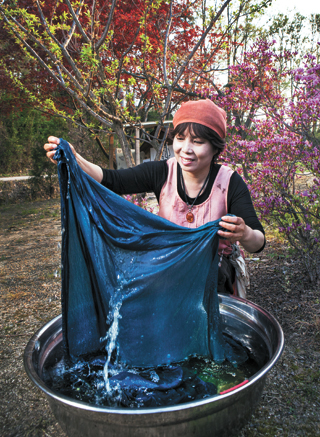 “Dyeing is a conversation between me and nature,” Nam said. “Through pushing and pulling and talking with nature, I can depict a vivid and rich array of colors that are impossible to compare with colors [achieved] from mixing paints, so it gives me indescribable joy and happiness.”

The most impressive among all the exhibits that Nam has held for her work, is an annual one in Tongdo Temple, located in Yangsan, South Gyeongsang. The naturally dyed fabrics, which were spread on the ground and surrounded by wild flowers and the beautiful May sky, provided a spectacular view. The whole combination of colors from nature reminded viewers of a watercolor.

The third anniversary of that exhibition will be held from June 6 to 7.

“I have a lot to do for the popularization of natural dyeing,” Nam said with a big smile.

“I hope to make stylish clothes that people can comfortably wear when they go to work. Also it is my duty to make dyes that last after washing. I will work hard on this and lead the world of natural dyeing, which gives people heathy and joyful clothing.”