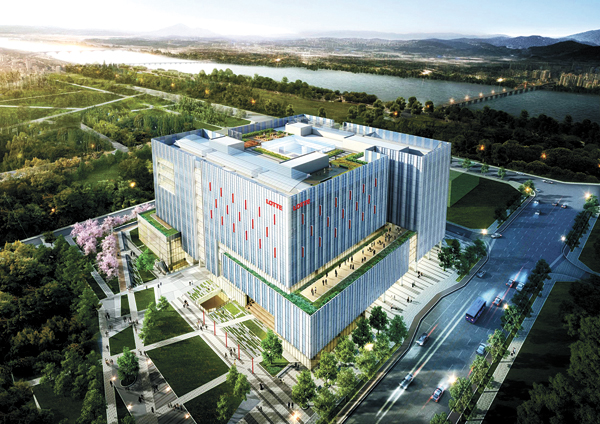 A computer rendering of the Lotte R&D center. Provided by Lotte Group

The new research center will replace the existing Lotte R&D Center, which has been responsible for developing new food products and technologies. It has also overseen and managed hygiene and safety issues related to food production.

Surging interest in health and functional foods amid a rapidly aging population has heightened the need for a more comprehensive research and development capacity, Lotte said.

The new center will oversee product development for the group’s affiliates, including Lotte Confectionary, a snack maker; Lotte Chilsung, a beverage maker; Lotte Foods, a food manufacturer and caterer; and Lotteria, a fast food chain.

Research staff from Lotte Chemical will join the new center to continue their work on food packaging.

In addition, the new building will offer space for the group’s collaborations with state-run research institutes and external agencies.

The number of research staff will double to 600 from the current 300, according to the company.

The new building will also be used as a venue to facilitate better communication with customers, Lotte said.

It will house a “culinary culture center,” where customers can learn new recipes from cooking experts, as well as a “consumer sensibility center,” where potential customers will be invited to taste and review new products.

The “global real-time conference room,” where Lotte will communicate with its overseas staff members and offer mentoring services to companies interested in securing a Halal certification, will also be built within the vicinity.

“The newly relocated research center in Magok District will not only contribute to the area’s economy, but play a key role as the mecca of food research [for Lotte Group],” said Yeo Myung-jae, the head of the Lotte R&D Center.

The ground-breaking ceremony was held Tuesday, and the construction of the new research center is expected to be finished in two years, with the opening slated for June 2017.The eight-story building will also have three underground floors with total space measuring 83,102 square meters (894,502 square feet).