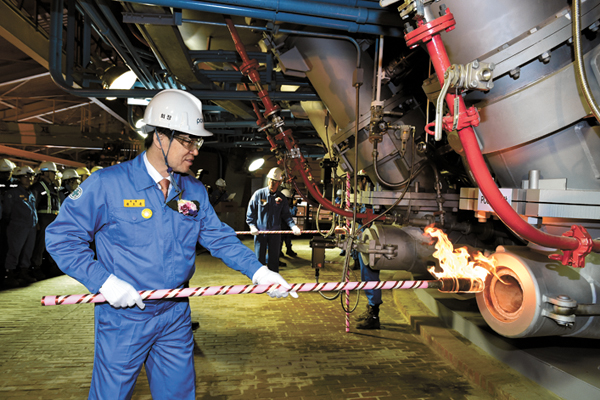 Posco Chairman Kwon Oh-joon blows heat into the No. 2 blast furnace at the company’s Pohang plant on Tuesday. Provided by the company

Steelmaker Posco has wrapped up its 95-day renovation project on the No. 2 blast furnace at its Pohang plant in North Gyeongsang - the third renovation for the facility.

The company said it cost about 300 billion won ($273.6 million) to add more advanced systems, including the one that improved the facility’s cooling system to lengthen the lifespan of the blast furnace.

The furnace started operation in May 1976 and has produced 69 million tons of crude steel over 38 years. After opening the system in 1976, the total crude steel output for South Korea reached 4 million tons per year, surpassing North Korea’s 3.2 million tons. The products from the facility were supplied to the nation’s core manufacturing businesses including auto, shipbuilding and electronics.