These days, ceramic means much more than pottery

These days, ceramic means much more than pottery 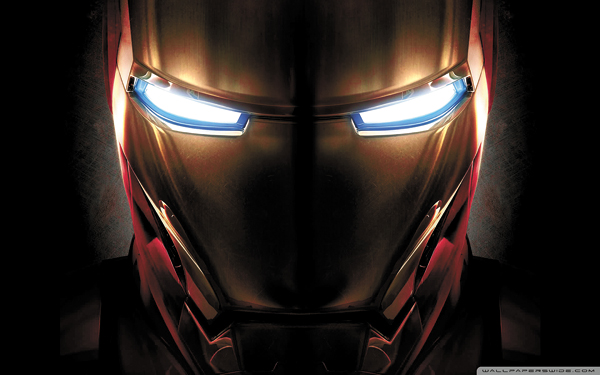 A fantasy movie where Iron Man in a robot suit defeats his opponent may no longer be just a fantasy. An arc reactor implanted in Iron Man’s body generates as much energy as 12 one-gigawatt nuclear power plants.

Wearable technology like smartwatches, medical devices and sports bands are expected to replace the smartphone industry, which is experiencing market saturation. 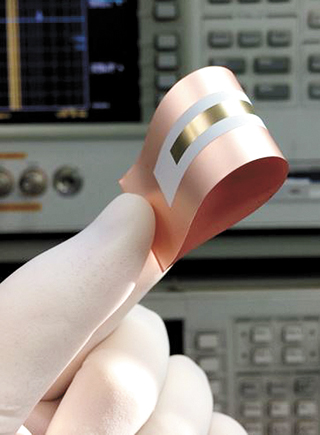 Ceramic is a material made of elements and metals extracted from soil. Ceramic material, which includes glass, tile, cement and Goryeo celadon, a jade-colored pottery developed in the Goryeo dynasty in Korea, is now spotlighted as a cutting-edge substance used in energy, IT, and bio industry.

Kim and his team tried making flexible ceramic, but soon found that ceramic is too fragile to make it wearable. Then they came up with a new idea of transforming powder into ink to be used in 3D printers. The result was very successful and flexible ceramics could be made. Kim covered the ceramic with plastic ink using a 3D printer. The flexible hybrid ceramic was finally made as a result of mixing two processes, forming and covering. 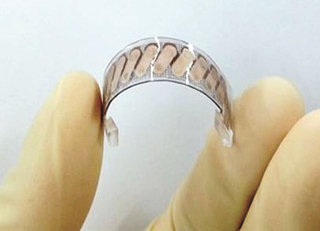 “Thermoelectric material” invented by Cho Byung-jin and research fellows at the Korea Advanced Institute of Science and Technology (Kaist). The flexible material generates energy and the can be attached to body parts like wrists.

Early this year, Kim and his research fellows started research on a piezoelectric device, whose main ingredients are lead, zirconium and titanium. It generates power when touched or pressed. For example, at Seomyeon subway station in Busan, piezoelectric ceramic generates electricity for charging mobiles and playing a baseball game on a display. Similarly, at a subway station in Tokyo, passengers generate electric power when they pass an electric ticket gate. “We succeeded in generating electricity using flexible hybrid ceramic,” Kim told the JoongAng Ilbo. “We are the first in the world to invent a flexible piezoelectric device.”

Experts say that in the future, hybrid ceramic attached to human body, especially on elbows or knees, will generate electric power when the wearer moves. The flexible hybrid ceramic could be used as a battery for a smartwatch equipped with a compatible chip.

The flexible hybrid ceramic can be applied to various fields. High-tech medical care is one of them. For instance, a heart implant sensor piezoelectric device could check medical information such as blood pressure and heart rate and send it to physicians. To be adapted for the complex human body, a material that is much more flexible became necessary. At the same time, three-dimensional design through 3D printing was vital to reduce size. In short, a minimized chip with more diverse functions now can be produced. 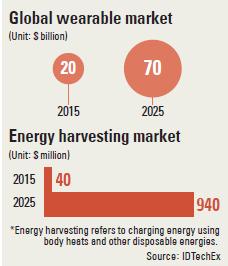 According to the Ministry of Trade, Industry and Energy, the scale of world ceramic market, currently estimated at 440 trillion won ($402 billion), will rocket to 840 trillion won by 2025. The domestic market is expected to expand threefold to 220 trillion won in a decade. In particular, high-tech ceramic’s share of the ceramic market is expected to jump to 70 percent. However, advanced businesses like Kyocera, Murata and TDK in Japan and Corning in the United States with fundamental technologies are far ahead of Korean companies.

Korean researchers have had outstanding results in the field of wearable charging. In early April, the nano structure physics research team of the government-affiliated Institute for Basic Science (IBS) invented “thermoelectric material” through studying metal engineering. Thermoelectric material converts heat into electric power. The research team doubled the material’s efficiency over the previous version by using a technology that transforms metallic powder into metallic chunks. The team attained the world’s best performance of thermoelectric material by using liquid to facilitate adherence properties of the powder. 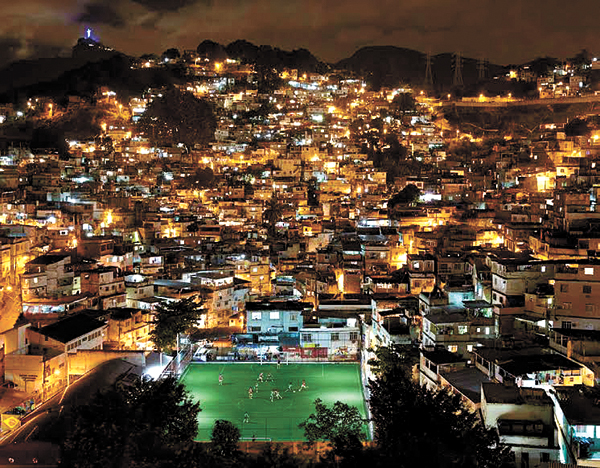 The British company Pavegen laid piezoelectric devices on a soccer field in a Rio de Janeiro’s slum area last September. They power electric lights at night when children play on the grass. [Photo from Pavegen website]

“When assuming a commercialization level of 100 percent, the performance of the newly invented material is at 70 percent compared to 40 percent for U.S. and Japanese thermoelectric material,” said an official at the Ministry of Trade, Industry and Energy. The result, attained by joint research with teams from Samsung Advanced Institute of Technology, Kangwon National University and Sungkyunkwan University research teams, was published in Science, a leading scientific journal.
In the future, thermoelectric material will use body heat to produce power for wearable devices. Also, the material could be used to convert the heat from car and factory exhaust into electric power.

Cho Byung-jin and research fellows at the department of electrical engineering at the Korea Advanced Institute of Science and Technology (Kaist) invented a technology based on the principle that electricity flows through semiconductors when body heat results in different temperatures inside clothes compared to the outside. Cho printed a mixture of metals such as bismuth and tellurium onto glass fiber, which enabled the team to produce thin, light and flexible thermoelectric material. This newly invented technology received the 2015 Netexplo Award, presented in partnership with Unesco in February, marking the first time the honor went to a Korean institute.

“Thermo material invented previously, we were unable to wear,” said Cho. “But the new technology made materials flexible and, therefore, wearable.” He established a venture called TEGway with support from the Daejeon Center for Creative Economy and Innovation last September, targeting commercialization of thermoelectric material. “UC Berkeley, MIT, and German and Russian government-affiliated institutes occupy most of the space in the research field, but we are No. 1 in flexible and wearable thermo material, but it’s still not easy to generate enough energy to charge smartphones.”

It doesn’t need to be high-tech material or body heat, though. Recently, outdoor fashion brand Kolon released a jacket equipped with a wind turbine generator. The jacket can generate energy for emergency charging from wind blowing at 15 kilometers per hour (9 miles per hour).

Ceramic, thermoelectric material and wind power jackets are all green energy sources in terms of recycling or utilizing unused energy around us. This is known as energy harvesting. Energy harvesting uses nano materials that will enable the development of artificial internal organs without batteries and power generators for micro robots shot into blood vessels and is included in a report titled “10 Future Technologies the Will Make Society Safer” released by the Korea Institute of Science and Technology Evaluation and Planning.

According to U.S. market research company IDTechEx, the world’s wearable device market will expand to $70 billion in a decade, a more than threefold increase, and the energy harvesting market will be 24 times bigger at $950 million during the same period.

A slogan on a British company Pavegen’s website, “You are the power,” best describes the nature of the business. Pavegen lights city streetlamps and traffic lights with piezoelectric tile. Last year, the company illuminated a soccer field in a Rio de Janeiro slum with a piezoelectric device.

Hearty energy made from body heat; a fantasy comes true with the growing trends of wearable devices and green energy.