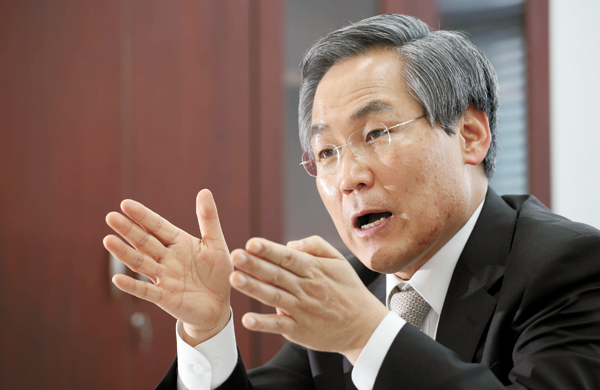 Woo Yoon-keun, the former floor leader of the New Politics Alliance for Democracy, said serving as the floor leader for the last seven months was the most valuable experience of his 11-year political career. By Kim Kyung-bin

Woo Yoon-keun, the former floor leader of the main opposition New Politics Alliance for Democracy (NPAD), is a politician who puts negotiation first when it comes to solving disagreements with the ruling Saenuri Party. Since taking the position last October, Woo has shown his capacity as a negotiator by reaching agreements on the country’s most pressing issues: a special law to investigate the Sewol ferry disaster; the anti-graft bill passed in March; and a reform bill for the pension system for civil servants.

In an interview with the JoongAng Ilbo last week, Woo reflected on the last seven months as the floor leader of Korea’s biggest opposition party.

Q. The agreement on the plan to reform the civil servants’ pension system has drawn a lot of criticism. The government has said that increasing pension coverage for a subscriber’s nominal income level in the national pension system is a typical populist policy.

A. There are many concerns among older generation as the number of seniors living under the poverty line has increased. Compared to other countries in the Organization for Economic Cooperation and Development, Korea’s pension coverage for a subscriber’s nominal income level in the national pension system is much lower. [The agreement] it is just to make coverage normal. In regard to how to secure financial sources, a group composed of experts will discuss it to figure out a solution.

But it’s hard to understand that the revision in the national pension system is part of the reform plan for the civil servants’ pension system. What do you say to that?

While agreeing on the reform last year, both parties also promised to discuss the national pension system. If not, an agreement would not have been reached.

How would you describe your feelings completing your seven-month term as floor leader?

I wanted to show voters a new aspect of politics. For the first time, I held a regular meeting with the ruling party each week. As talks continued, I saw [both parties] find common ground.

What’s your most memorable moment in reaching a compromise?

It was the agreement on the special law on the Sewol ferry just 20 days after I was appointed floor leader. There were numerous negotiations with the ruling party. Recommending a special independent counsel was a problem that put the law in limbo. The Saenuri Party strongly opposed it, particularly the participation of the victims’ families in the negotiation. So [I] suggested using a part of the quota assigned to the NPAD for the victims’ families. The ruling party accepted it, and it was a significant moment in the negotiation.

What was your biggest achievement during your term?

It was enacting a shared tax to support a regional fire-protection system and safety facilities. Following the Sewol sinking, the government had talked about safety measures, but nothing had been made. So after pointing out where the money from the price hike on cigarettes would go, I insisted the money go toward the fire-protection system. The ruling Saenuri Party agreed.

Which side is more difficult to persuade? The ruling Saenuri Party or the hard-liners in the NPAD?

The latter were much harder to persuade. Finding a unified voice with them [on an issue] was the most difficult part. [Because the NPAD has a large number of hard-liners,] our party meetings often last for a long time. It takes three hours, and sometimes more than four hours. I thought this was wrong. So I often invited them to my office to have a conversation. I tried to reflect their opinions even though it was not 100 percent supported. Later, moods at the meeting changed.

You led the passage of the 2015 budget. [Since 2002, parliament has failed to meet the deadline to pass the next year’s budget due to often tough confrontation between the ruling and opposition parties.]

With opposition toward the national budget each year, the NPAD has seen the ruling party forced to pass the budget. Because of that experience, I decided, “If I am ever elected floor leader, I’ll sit with the ruling party [and discuss passing the budget.]”

Some critics say you’re not remarkable as a floor leader.

In my 11-year political career, I’ve never seen the opposition party’s approval rating increase by confronting the ruling party. It’s easy to hold a protest outside parliament. On the other hand, it’s more difficult to reach a compromise through a negotiation with the ruling party. But it is right to gain benefits and justifications through the negotiation.

But shouldn’t you listen to the NPAD’s supporters, like unions and civic groups?

I’ve never overlooked them. When the members from the Korean Teachers and Education Workers Union occupied my office to express their opposition to reforms, I said, “We are a political party aiming to govern the country. So we have to pay attention to every person in the country.”

In politics, leaders should have their own values and philosophy. Leaders should communicate with those who have other opinions and learn to trust them.

When you were elected, you opposed the tax increase and the price hike on cigarettes. But in the end you followed the ruling party’s plan.

Even though I tried to oppose the price hike, politics is about the reality. I was concerned the bill was passed by the ruling Saenuri Party; that’s why I accepted the hike. But the NPAD wielded more influence over real estate-related deregulations.

What did you address at the NPAD’s last meeting?

Under the current political system, the ruling party can serve the role of spokesman for the government, and the opposition can be the protester. But during my term, I appreciated that parliament did not have any disruptions. But [I think] the distribution of power through a constitutional amendment is required for politics to be better.

Would you describe how the ruling Saenuri Party serves as a spokesman for the government?

One time, Yoo Seong-min, the ruling Saenuri Party’s floor leader, said it would be hard to form a committee for a constitutional amendment because it went against President Park Geun-hye’s stance. He said the Blue House was concerned the amendment would bring about an early lame duck period for the president and wanted to focus on the economy instead. So I said, “The ruling party should not be pressured by the president, and that is why a constitutional amendment is needed.”

You’ve pushed for a constitutional amendment, but it hasn’t drawn much public attention.

Political reform has meant change in the nomination process so far. But has the country’s politics changed? The press has also not reported much on a possible constitutional amendment. It is necessary for the next president to urge a constitutional change and criticize the current political system.