Park calls for a response to North’s launch

Park calls for a response to North’s launch 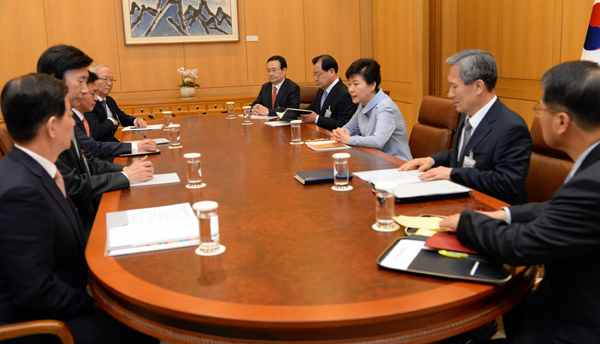 President Park Geun-hye hosts a meeting of her top security officials in the Blue House on Tuesday to discuss Seoul’s countermeasures following the North’s firing of a submarine-launched ballistic missile.[Joint Press Corps]

President Park Geun-hye on Tuesday reaffirmed her commitment to counter North Korea’s escalating asymmetrical threats by expanding the South’s plan to build its own missile defense system, and she denounced Pyongyang’s test-firing of a ballistic missile from a submarine last Friday.

Park hosted a meeting of her top security officials on Tuesday to discuss Seoul’s countermeasures following the North’s firing of a submarine-launched ballistic missile (SLBM), a security nightmare for Seoul, the region and its allies. The communist regime’s leader Kim Jong-un observed the test-firing firsthand on Friday.

Saying that the North’s development of the SLBM is a grave threat to the stability of not only the Korean Peninsula but also Northeast Asia, Park ordered her security officials to come up with a counter to the provocation and maintain a strong deterrence based on the Korea-U.S. alliance, Blue House spokesman Min Kyung-wook said in a press release.

“If we modify the Kill Chain and KAMD, which we are building in preparation for the North’s missile threats, they will be enough to counter the North’s development,” Park was quoted as saying.

The South has said earlier it would build its own missile defense system known as Korea Air and Missile Defense (KAMD) by using a terminal-phase, low-altitude, hit-and-kill approach. The South plans to establish a so-called Kill Chain, an integrated information, surveillance and pre-emptive strike system to eliminate North Korean missiles before they are launched.

The government aimed at completing the Kill Chain and KAMD by 2020 by investing about 20 trillion won ($18.3 billion). Security experts are concerned the plan is useless if the North acquires the capability to fire ballistic missiles from submarines.

Defense Ministry spokesman Kim Min-seok also confirmed Tuesday that the military will expand its concept of the Kill Chain and the KAMD to counter the North’s new technological ability. “We do have a plan if the North operationally deploys the SLBM in four to five years,” Kim said. “It is a concept of expanding the Kill Chain and the KAMD. When a new threat emerges, it is obvious that we expand them.”

Kim said the South has the capability to track down North Korean submarines in real time when they are in naval bases. “If we concluded that a SLBM-capable submarine is a threat, we can pre-emptively take it out.”

The military also decided to improve its systems to detect the North’s SLBMs and upgrade submarine warfare capabilities. A military official said the modifications will be made based on the “4D Strategy” to detect, defend, disrupt and destroy North Korean threats, introduced by Commander Curtis Scaparrotti of the Korea-U.S. Combined Forces Command.

The two countries aim to create an operational plan based on that strategy and it is expected to include a plan to shoot down an SLBM-capable submarine of the North.

“We have an underwater interception system to counter the North’s submarines,” said the official. “Our military can operate Kill Chains both in the air and under water. We will improve our sonar abilities in the future.”

Adm. Choi Yoon-hee, chairman of the Joint Chiefs of Staff, met with General Scaparrotti on Tuesday and discussed the latest situation.

While Seoul reacted with obvious worry to the North’s test-firing of the SLBM, some Washington officials presented different assessments and downplayed Pyongyang’s capability.

“That was not a ballistic missile,” a U.S. defense official was quoted by Agence France-Presse, saying the test did not represent a technical breakthrough for the North.

“They are trying to develop that capability,” but there was no “imminent” threat of a submarine-launched missile arsenal coming on line in North Korea, said the official, who spoke on condition of anonymity.

A South Korean defense official said Tuesday that a dummy missile was ejected from a submarine and it successfully reached the boost phase. He said Korean and U.S. military authorities agreed on the same conclusion based on same intelligence. But Washington stressed that it would take years for the North to actually deploy an operationally capable SLBM.

“The North installed a vertical launcher on a submarine and succeeded in the test-firing of a dummy missile,” the South Korean defense official said. “But whether it actually built a real missile or not is not confirmed.”

The Ministry of Foreign Affairs also said the North’s SLBM test will be addressed next week in foreign ministerial talks between Seoul and Washington.

Foreign Minister Yun Byung-se was scheduled to meet with U.S. counterpart John Kerry on Monday to discuss Park’s upcoming trip to the United States in mid-June.