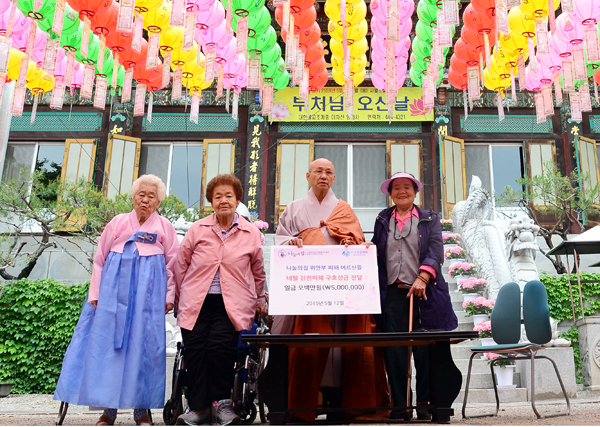 From left, Lee Ok-sun, Kim Gun-ja and Lee Ok-sun, who were sexually enslaved by the Japanese military during World War II, meet with the Venerable Song Wol-joo (third from left), the founder of Good Hands, at Yeonghwa Temple in Seoul on Tuesday to donate money after the devastating earthquakes in Nepal.[NEWSIS]

A few of the women forced into sexual slavery by the Japanese military during World War II, commonly known as “comfort women,” recently donated some of the money they had saved for years to help the people in Nepal suffering from two massive earthquakes.

Ten comfort women living at the House of Sharing, a facility supporting the victims, in Gwangju, Gyeonggi, donated 5 million won ($4,561) to the non-governmental organization Good Hands.

On Tuesday, three of the victims visited Yeong Hwa Temple in Seoul, where the founder of the organization is serving.

Nepal was struck by several more earthquakes and aftershocks Tuesday, including one that was a 7.3 on the Richter scale, according to the U.S. Geological Survey. A 7.8-magnitude quake hit the country on April 25, causing massive damage.

Kim Gun-ja, 90, and Lee Ok-sun, 89, each donated 2 million won, while eight other former comfort women donated amounts ranging from 100,000 to 300,000 won. “We had a hard time as victims [of sexual slavery], but we are living with hope after receiving so much help from around the world,” Kim said. “We hope Nepal can recover from the damage as soon as possible.”

Established in 2003, Good Hands provides international development and aid, and Nepal is one of the countries in which the organization operates. The funds were raised after the elderly women heard the news about the 7.8-magnitude earthquake last month. They said they wanted to pay back some of the help and support they received from other countries.

The donation was part of money that the women had saved for years, including government aid provided for their living expenses.

Good Hands said the organization will use the money to send drinking water and food to its relief camp in Kathmandu, Nepal’s capital.

On Sunday, the death toll from the earthquake exceeded 8,000, according to Nepal’s National Emergency Operations Center. More than 17,000 people were injured and 366 remain missing.